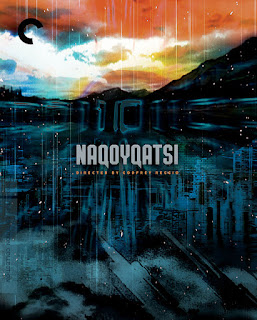 Naqoyqatsi is not worthy of its predecessors, but it's still a beautifully shot and hypnotic film that, like the first two films in the series, couldn't really be more obvious with the point it is making. Created just as Hollywood was shifting into the current CGI-dominated blockbuster age, the film takes a virtual approach to what had previously been a hyper-realistic portrait of our world. This makes the film's subjects quite literally less organic, but also makes the journey less so figuratively. The connection between the three parts feels looser, while the evolution towards the escalation of war in our modern age - and human competition in general - makes the film feel significantly smaller than Reggio's first two films.

Seeing the film now and knowing when it was released, it's impossible not to assume the film was a direct response to 9/11 and the war America waged in its wake (just one at that point, though everyone knew Iraq was coming). However, Reggio had been in production on Naqoyqatsi for some time when the attacks occurred, and their offices were coincidentally located in Manhattan. These events didn't impact the film in any significant ways beyond making it that much more relevant (though there are brief shots of some of the players in American politics), and I don't think the film should be too tightly entwined with the attacks. Like Koyaanisqatsi and Powaqqatsi, the film is clearly intended to be a broad critique of civilization and our view of our place in the world.

What really hurts Naqoyqatsi isn't the potentially stale topicality of the film, but the certainly stale technology. No one would be surprised that Koyaanisqatsi was made in the 1980s, but Noaqoyqatsi could have only been made in 2002, at the midway moment when CGI seemed like it was realistic but had not actually reached an acceptable level yet. The movie feels passable during most sequences, but becomes a tech-heavy drag at others where moments in previous installments were left to gaze at the wonder of creation (it doesn't help that Philip Glass's score here is undoubtedly his least invigorating in the series). The most beautiful shots here are not of the Earth - and they certainly aren't of animation - but of humans, Olympic athletes leaping through the air and performing feats of strength. These are impressively filmed, but not what I expect or hope for from a Qatsi film.

I ultimately still enjoyed Naqoyqatsi, but it prevents the trilogy as a whole from being perfect. It might not be as bad as, say, The Godfather III, but that might just be because it doesn't have Sofia Coppola in it, and it has the generally same effect on the series.
Posted by bza at 8:38 AM