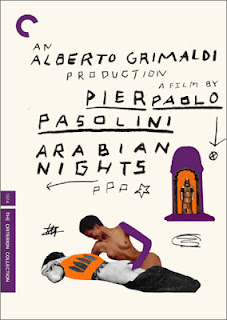 Like The Decameron and The Canterbury Tales, Arabian Nights is based on an iconic literary pillar of its respective culture, with an emphasis on the sexual tales. However, Arabian Nights is a much more cohesive narrative - though this is a bit misleading. After all, the story winds its way through numerous protagonists and settings, with stories told in so many layers that the movie takes on its own narrative framing, where the overarching story of the film informs the stories within it. There is just as much sexuality in Arabian Nights as the previous two films - in some ways more. And it's just as ludicrous at times, like when one character aims a penis-tipped arrow at a woman's nether regions. But Arabian Nights never feels cheesy and borderline soft-core where the others practically exalted this tone as the pinnacle of their artistic striving.

Arabian Nights isn't a great movie. It's too long, with too many side stories that aren't interesting, and it lacks compelling character development up front that would have made the core story more enjoyable and engaging. I liked watching Arabian Nights, just as I liked watching The Decameron. But I don't know how much I'll really think about this movie, despite its unique structure and enjoyable scope.
Posted by bza at 1:04 PM