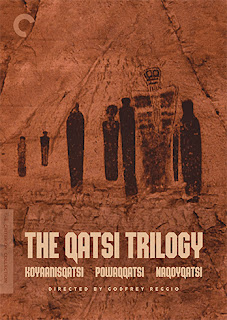 When it comes out in two weeks, The Qatsi Trilogy will be the second "trilogy of life" that Criterion releases in as many months. The two trilogies are of course totally different, but represent the impressive scope of the Collection - a provocative sex series sits just a handful of films away from a wordless and often human-less documentary set with roughly the same title.

They are hardly worth comparing, but in case anyone was wondering this is certainly the more essential set. In fact, despite its weaker third film and the need to see all three on as big of a screen as possible, this just might be the most essential thing Criterion has released this year - only Godard's Weekend really comes close in terms of pure significance and accomplishment.

Of course, Koyaanisqatsi is the stand-out here, and, while I realize I'm getting all proclaimy up in here, I think it deserves to be considered one of the greatest documentaries ever made. It certainly joins Hoop Dreams, Harlan County U.S.A., and Night and Fog as exemplary offerings from the genre in the Collection. But unlike some other sets where it's a shame that one of the movies is not available on its own, this is a great series to have together. Even if Naqoyqatsi is less effective, it's still an interesting experience, and Powaqqatsi is maybe the most breathtakingly beautiful of the three.

Bottom line if you're considering this set, if you have a great system at home and don't mind sensory experiences outside the conventional narrative framework, this is a no-brainer. Within the larger context of Criterion, this should be a stand-out release in their collection for years to come.