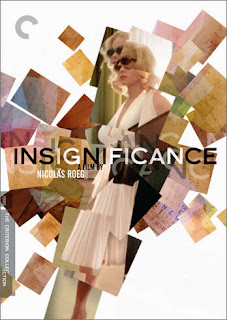 Roeg's only(?) adaptation of a play is most interesting for the things he does to move away from the original text to create a true cinematic experience. This is most obvious in the final moments - as Einstein's imagination turns his hotel room into a nuclear holocaust with Marilyn Monroe at the center of it - but Roeg does a lot to tweak the film's source material in interesting ways. Unfortunately, the movie remains stubbornly static in the majority of its running time, making it the least essential Roeg film in the Collection.

The play's premise is very intriguing: take four iconic figures from mid-century America and shake them all together in a fictional bottle and see what bubbles up. The best scenes, unsurprisingly, are the ones with Monroe and Einstein (they aren't actually identified as these figures, but instead the actress and the professor). But Teresa Russell's Monroe impersonation can be distracting (the role was played on stage by Judy Davis, which must have been pretty special), and Gary Busey as Joe DiMaggio generally just sulks around, I assume because he was so miscast.

Then there's the 80s problem, which makes this 1950s-set think piece feel almost surreal in its aesthetic. Roeg's films always feel out of history, but here the impression feels unintentional, making it more awkward. Insignificance is far from a bad movie - and the final sequence in particular is downright masterful - but the combination of all of these flaws makes the movie less interesting than its script might have been, and probably was in its original incarnation.
Posted by bza at 7:15 AM