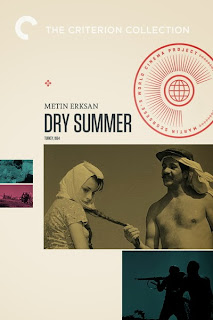 Dry Summer is my favorite film in the World Cinema boxset so far. The film features one of the great villains in Criterion - Osman is a true piece of shit, the kind of character that makes your skin crawl and wish you could climb into the movie so you could smack the shit out of him. At times I hated him so much (and he seemed so over-the-top despicable) that I felt uncomfortable watching the film. But the incredible direction and suspense of the final sequence won me over.

One of the most interesting things about the film is how Erksan is able to take a socialist premise not dissimilar to that of Redes and create a timeless morality tale laced with Hitchcockian suspense. The movie's themes are reminiscent of The Treasure of Sierra Madre, though Bogart and friends are arguably more admirable than Osman prior to the discovery of the gold, and the way in which greed and hubris overtake the respective protagonists seems guided by an invisible hand - just not the one such craven capitalists pray to. Dry Summer might not be the towering parable Huston's film is, but it is a grand statement from an under-explored corner of the cinematic globe.
Posted by bza at 7:21 PM 2 comments: