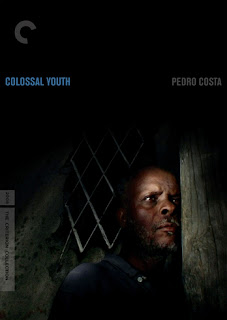 Colossal Youth is a breakthrough in Costa's loosely defined Fontainhas trilogy: the first movie that feels intimately bonded to its characters and pulls the viewer in instead of keeping them at arm's length. Despite this new relationship with its subjects, however, the film remains nearly as challenging as the previous films - certainly more than Ossos, though nothing can match In Vanda's Room for a pure cinematic viewing gauntlet.

The film's story also falls between the two films in both the tightness of its narrative and its conventionality. Set after the projects have been demolished and many of the displaced residents are moving into new towers, the film follows one man as he bounces back and forth between the two worlds, one bright and gleaming mirage and one dank and dark forgotten hallucination. Unlike In Vanda's Room, most of the scenes here actually consist of people doing things, playing cards, moving through spaces, primarily telling stories. This makes the film feel less intrusive, but it doesn't provide any real throughline for the dialog - the stories here make Slacker look like a conventional romantic comedy.

It's easy to joke about Colossal Youth and Costa's work, simply because it's so unconventional - calling this movie cliche is like calling a David Lynch film predictable. But this is a deeply serious movie, made with the kind of humanistic care often ignored or taken for granted in even the most socially conscious cinema. Costa was working towards Colossal Youth for a decade. It took him this long to understand these characters and this world, thereby allowing us to feel like we've been in their shoes. It's not the best film in the trilogy - that label would belong to In Vanda's Room if I had my say - but it's the most successful at bringing you into the world it inhabits, something equally impressive.
Posted by bza at 7:39 AM