#518: By Brakhage: An Anthology, Volumes One and Two 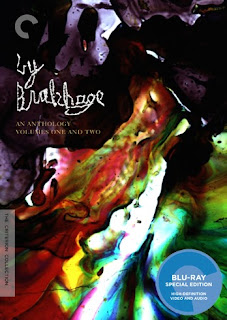 This is ostensibly a review of the double collection of By Brakhage that Criterion released in 2010, just five months after I began this blog. What it really is, however, is a post about how nearly four years later, after 476 posts, I have now seen every Criterion movie with a spine number up to #654. Of the movies released or announced, I only have eight spine numbers left to check off my list - only two of these are currently in stores (and I'm halfway done with Pierre Etaix, which would bring me up to #660).

I honestly never thought I would get here - I started this blog in 2009 with the intention of watching maybe three or four a month and never really getting anywhere. But with the addition of so many Criterion movies on Netflix - and then the explosion when they joined up with Hulu - along with the increasing pleasure of being exposed to so many of what are now my favorite movies ever, I quickly escalated my pace until I reached this point. When you have a number like 250 or even 75 staring at you, you start to wonder if you'll ever get there (and if your marriage will survive - thanks for staying with me, Audrey, even if it meant one more samurai movie!) and if you really didn't bite off more than you could chew.

Since I started this journey I bought a condo, became a father (and watched all 15 hours of The Human Condition while he napped on me!), and wrote approximately 200,000 words on the films I love - five times the number of words in my first draft of my book on Illmatic and probably 20 times the number of words on Penguin. This is a staggering amount of work when I step back and look at it, one that amounts to my intellectual journey over the past four years as both a film watcher and a writer.

I will continue to post here, but I assume it will be less frequently (something that's really already happened) - I hope to keep up with new releases as they come (I have the rest of Etaix cued up, and then Marketa Lavarova when I find enough time to carve out), and I'm excited to see what the future holds for Criterion in the all-digital age. I hope anyone who has dropped in here at any time has at the very least gotten my enthusiasm for what value the Collection provides and my willingness to have an open mind towards even the least-likely appealing films I have been subjected to.

Anyway, this all seems a little out-of-proportion for my silly little online journal, but after so long, I knew I needed to mark this ending in some way. As a wiserich man once said, "Done, on to the next one!" 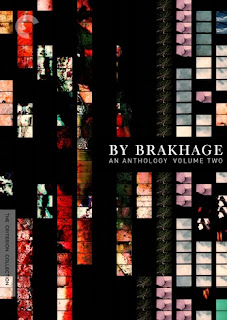 Still, with substantially more lengthy pieces on volume two, this collection is much more difficult to wade through. I loved the first volume, but I am not a huge experimental film fan and the genre is not really made for home viewing, where slow works mean more distractions have the chance to seep in and you being to wonder how much more time is left in this one before the next one comes on and maybe you'll just check your email again real quick and oh, is that a link to a new article about, etc. I blazed through the first set in under a week - this one took me nearly six months.

That shouldn't discourage fans of the first set from seeking out this one (and really, if you have a blu-ray player, why not buy the whole box?) but it does indicate that most of what is here feels more like minor Brakhage. There are certainly some great pieces, whether it's the kinetic climax of The Domain of the Moment or the sprawling politics of the multi-part Visions in Meditation. But too often these films feel like they were meant to be seen in bits and pieces rather than in one continuous viewing. Although it makes me feel like a classic American, anything over fifteen minutes here had me wondering at one point or another how much longer it was going to be. Perhaps I want to like experimental film more than I do, or perhaps I just resist something lacking any semblance of a narrative when it moves beyond a short piece into something resembling acts. Either way, I was much less taken by this volume, even if I continue to be grateful that Criterion dedicates itself to project like this.
Posted by bza at 11:30 AM No comments: 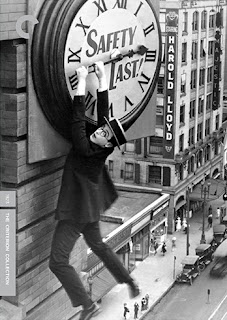 For some reason I had never seen a Harold Lloyd film in full until I finally got around to Safety Last this week. This is not the case with Woody Allen, who clearly knows this film and Lloyd's character the Glass (whose name in the movie really is Harold Lloyd) extremely well. In fact, as much as I immediately fell in love with the humor and suspense of the film, what I was really blown away by was how much of Woody Allen's style had been influenced by Lloyd.

This might seem surprising to the casual viewer, as Allen is generally known as a verbal comedian most obviously influenced by Groucho Marx (with a perhaps more unabashedly Jewish intellectual bend - I mean this in a good way, btw). But in reality, Allen's work has always had a strong visual component, from his first film, Take the Money and Run, where Allen plays cello in a marching band (think about it) to his best films like Manhattan where Allen casually reaches into the pond in Central Park and pulls out a fistful of muck. These jokes share a clever playfulness and self-deprecating tone that isn't present in Chaplin's wistful musings or Keaton's set pieces - often dedicated to their creator's ingenuity rather than his clumsiness - but is all over Lloyd's style here. Allen's affectations, too, often seem directly lifted from the earlier actor: his knowing looks at the audience, his anxiety around impressing women, his loving jabs at women too stuffy or men too brutish - all these behaviors are manifested in Safety Last and throughout Allen's career. For a huge Woody Allen fan like myself, this discovery was quite significant.

Fortunately, Safety Last is so good that it would be impossible for it to be totally overshadowed. This is undeniably one of the towering classics of the silent comedy era. Similar to (the greatest of them all) The General, it also works as a suspenseful adventure as well, especially in the last sequence, which is impossible to avoid getting wrapped up in. It's funny how Hollywood can spend $200 million on cartoons fighting each other in space as explosions go off around them and one guy climbing a building 90 years ago can be far more suspenseful and thrilling - but here I go getting old man on everybody!

What I really love about Safety Last ultimately are the little things - the gags and winks to the audience that are the true genius of the film, surrounded by an elementary plot and awkward devices that would be at home in a Mickey Mouse cartoon (the forced way the film gets Lloyd's friend set up as wanted by the police is maybe the best example). These gems range from Lloyd straightening his hair using his (superimposed) reflection on a bald man's head to the clever way in which Lloyd's name is incorporated into the film. Keaton was perhaps the master of using the medium as a tool in his joke kit, but Safety Last makes it clear that this sensibility was very much established across the silent era.

Criterion has always been dedicated to silent cinema, as indicated by its early releases of masterpieces like Nanook of the North and The Passion of Joan of Arc. But recent years have seen a redoubling of this dedication, most notably with their impeccable Von Sternberg boxset and their Chaplin acquisitions but also with relatively lesser-known gems like Lonesome and The Phantom Carriage. Safety Last may be their most significant recent silent release, though, simply because it walks the line between the iconic status of Chaplin's work (which of course was never in danger of being forgotten) and the artistic ingenuity of Lonesome (which is nevertheless a more minor film). It's just the kind of movie Criterion was created to release.

Two side notes about the cover: 1)Though a lot of work probably went into certain elements, my guess is that few covers have had as unquestionable an image selection as this one - there were simply no other reasonable options. 2) Is this the only cover in the collection that does not feature the name of the director of the film? edit: just thought of one - The Game. But still, it's pretty rare.
Posted by bza at 7:39 PM No comments: 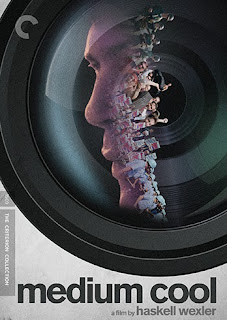 In some ways, Medium Cool is a close relative of many of the other American films in the Collection from the same era. The BBS boxset, particularly A Safe Place and its crown jewel, Easy Rider, along with Two-Lane Blacktop are personal movies that are simultaneously trying to say something, both about film and the world at the time. Medium Cool fits nicely into this style in a lot of ways.

But there's something else about Wexler's film that sets it apart: its flirtation with the documentary genre that leads the film towards a much grayer cinematic landscape. The footage taken at the DNC in Chicago is the centerpiece of the film, and it's therefore where it lives or dies, depending on your tolerance for docu/drama style and tone.

As might be expected from Wexler, the film is much more beautiful than it has any business being.The mix of real and pseudo documentary footage with a variety of more obvious narrative scenes is seamlessly blended, and Wexler's ability to maintain a steady eye across a wide range of characters and settings is quite impressive. Robert Forster, meanwhile, might not be a star, but he carries the film with a hefty presence that reminded me of what Tarantino saw in him when he tried to resurrect his career 15 years ago.

Despite these positives, the film takes a while to build up any narrative momentum, and Wexler seems much more interested in capturing the broad range of life in Chicago in the late 60s than he does in telling a compelling and economic story. This makes the movie much more interesting for its value as a document of its time than for its story or any interesting combination of the two.

By the way, does anyone else see bacon in a frying pan in the cover? Or was that the intention?
Posted by bza at 4:28 AM No comments: