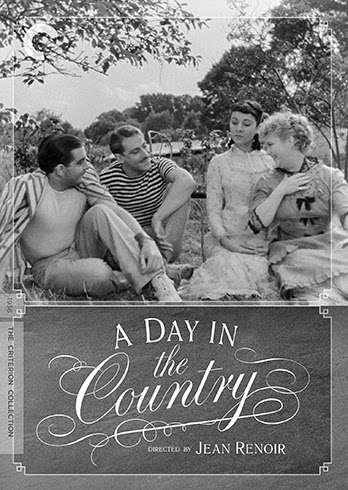 A Day in the Country is a simple and lyrical short intended to be a vignette in a larger work by the great Jean Renoir. Because the project was not finished, this piece didn't see a release until a decade after it was filmed. As a standalone Criterion release, A Day in the Country is an odd choice: it's only 40 minutes long and is certainly a minor work in the director's catalog (though it's hard to argue any of Renoir's work is truly minor considering his stature). The outtakes compilation included on the disc is longer than the film itself, making this set more about the supporting extras matching up with the main text than it is about the movie on its own.

Despite this, there is much to love in A Day in The Country. A couple of great performances from the two lovers anchor the film, while the romance/storm montage is striking in its beauty and poetic framing. The depiction of the city/country dichotomy is quite stereotypical, but the film is not striving for any complex grand investigation. It's equally easy to forgive the "no-means-yes" kiss scene, which has been replicated hundreds of times before and after this film.

Ultimately, though, the movie is fairly slight and it seems unlikely that anyone but Criterion or Renoir completists would be interested in purchasing this one. I'm glad to have seen it, but I doubt I'll watch it again.
Posted by bza at 8:33 AM 4 comments: