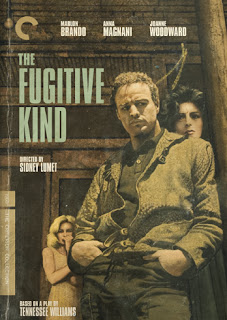 Sidney Lumet made a lot of great movies, including one of my favorite movies ever, written by another great American playwright, The Verdict. This movie, made four decades earlier and starring the greatest movie star actor of all time, isn't one of them. Unlike Lumet's debut, the classic 12 Angry Men (also now a Criterion film), this movie fails to transcend its theatrical roots - the dialog is over dramatized and the camera feels oddly static even when Lumet puts it somewhere interesting. The movie often feels like a teleplay rather than a film.

There is one reason to see The Fugitive Kind: Marlon Brando, who gives one of his many spectacular performances. Though it's not as great and obviously not as iconic as his performance in Tennessee Williams's better and better-known A Streetcar Named Desire, Brando's work here is subtle and stirring. It's another reminder of just how great he was, how easy it was for him to transcend his material without removing himself from it. As we move farther away from Brando's late-era physical collapse and poor film selection in the last two decades of his career (save The Freshman, which looks prescient now that DeNiro has turned himself into a parody), the actor's true place in history will be restored more and more. Quite simply, we wouldn't have film acting as we know it without Marlon Brando. Seeing him in a movie that is so obviously unable to avoid the pitfalls of theatrical adaptation makes the gap between him and everyone else even more clear.
Posted by bza at 6:31 AM