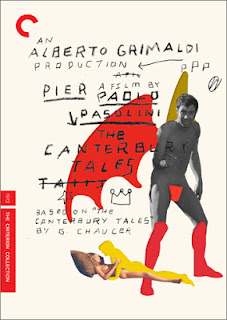 I did not like The Canterbury Tales. It came off like a mediocre version of The Decameron, with fewer jokes and more people farting in each other's faces. The scene in Hell, which has been much-touted and highly praised, is more impressive for the fact that it was actually made than for any quality. Maybe I'm just not a bathroom humor guy.

It's not surprising that the film would be grouped together with The Decameron as two thirds of a trilogy. Their similarities are legion: classic text adapted with an eye towards the more sexual and controversial themes and elements, a series of loosely connected stories rather than one overarching narrative, and again an unusual aesthetic and tone that walk the line between high art and low art.

But The Canterbury Tales lacks the novelty of its predecessor. Part of this is inevitable since it came second, but in reverse I suspect this movie would be seen as the failed experiment that produced the enjoyable and successful follow-up. This is because The Canterbury Tales lacks the affection and playfulness of The Decameron. It seems overly concerned with its own controversial nature, and stuck in a rut of iconoclasm without purpose.

Maybe I just don't like fart jokes, though.
Posted by bza at 7:43 AM