#628: The Forgiveness of Blood 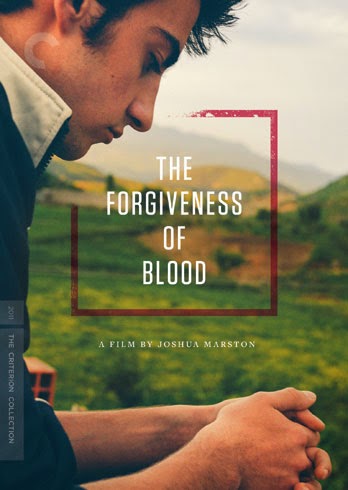 The Forgiveness of Blood is a very good movie. It's engaging, well-acted, and directed with a soft touch that leaves judgments up to the viewer. But as a film standing on its own merits, I don't necessarily know that it rises to Criterion level. When the movie was released earlier this year, it received good reviews, but garnered little attention. Like Marston's last movie, Maria, Full of Grace, The Forgiveness of Blood is a solid film in search of something to push it over into greatness. But that earlier film found an audience thanks to the much sexier (and more relevant to American audiences) subject of a drug mule smuggling heroin into the US and a remarkable lead performance from Catalina Sandino Moreno. None of the performances here shine like that one did, but these are all charismatic actors with striking faces who pull off the emotional range of their characters with a natural ease; Marston certainly has a way with actors. It's just that the subject matter of the film - and its Albanian setting - is so foreign to audiences that the stakes rarely seem real enough to get wrapped up in the interactions, something which probably doomed its theatrical run.

If the best case for the film's inclusion isn't its quality or its social significance, I would argue the movie merits another look from American audiences because of Marston's unique filmmaking choices - specifically, his choice to make two American films about non-Americans, including this one which has no connection to America at all. His background in journalism seems especially relevant in this regard, and when approached as narrative journalism pieces instead of typical fictional movies, the films become more interesting.

What would The Forgiveness of Blood had looked like had it been made by an Albanian director for Albanian audiences? Is the film in its current carnation more relevant as an introduction to a crucial aspect of modern Albanian society, or does it advance beyond this introduction and become a commentary on this aspect? Perhaps the most elementary question is whether Marston's intention with the film was to shine a light on Albania for Americans, or  to speak to a parallel but more subtle cultural conflict he sees within our own society.

Obviously Marston intends to project a global universality with his films that is not purposefully present in foreign films made for their native audiences. He must assume that his viewers will relate to his characters despite the gulf between their cultures and social norms, otherwise there is no purpose to his movies. The biggest risk he takes with his films is the potential for being viewed as a cultural tourist, surveying a society and attempting to capture it without intimate knowledge. Of course, many other filmmakers do this - think of John Sayles, who almost invariably has an eye on American stories but rarely uses the same setting or types of characters twice. But Marston, who, like me, grew up in the Los Angeles area and most likely had little contact with Albanians, takes this separation to the extreme with The Forgiveness of Blood.

There is a real push and pull at work when a filmmaker is removed from his subject, a conflict that is ever-present in modern-day American-style objective journalism. Because it is impossible to be truly objective, a work relies on viewers and readers to sort out the truth in what's on the screen. This is of course true of any movie - certainly viewers look at Triumph of the Will and For All Mankind with a different lens, though both claim to be documentaries. But when there is a clear separation between the filmmaker and his subject, particularly when a film is about something as little-known in America as Albanian common law, it can be difficult to sort out the director's skew from your own. It might be unfair, but I approach The Forgiveness of Blood with much more skepticism towards its depiction of modern day Albania than I might have had it been directed by an Albanian (it was co-written by an Albanian, by the way). In some respects, this is silly: Albanians can have just as skewed of a perspective as outsiders. But The Forgiveness of Blood speaks to the ways in which we use film (and by conduit other people) to teach us things about the world. Not only should this process be constantly questioned and reevaluated by the viewer, it should be examined by every filmmaker - or even artist - when pairing a subject with their own unique but limited perspective.
Posted by bza at 8:17 AM