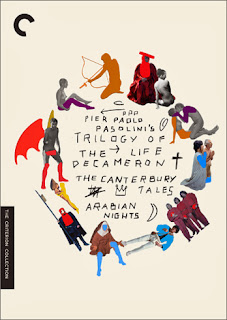 The Trilogy of Life is the first of two big box sets Criterion will be releasing for the Holiday season, and it's arguably the higher-profile one. This would no doubt be endlessly amusing to Pasolini, as he imagines Americans all over the country exchanging his most sexual works in plastic-wrapped high-end packaging under the Christmas tree. This is not the most typical gift for the season that I can think of, but it is certainly one of the most awkward.

Of the three films, I certainly liked Arabian Nights the most, although The Decameron is probably the most entertaining and accessible film in the bunch. Those two films are head-and-shoulders above The Canterbury Tales, which is so disappointing that I'm sure it would not have received a Criterion release had it not been tied to the other two, Pasolini or not.

I am beginning to appreciate Pasolini as an iconoclast, but I have yet to be truly impressed with any of his movies. I doubt I will start with Salo, but I'll try as best I can to keep an open mind...

The Decameron
The Canterbury Tales
Arabian Nights
Posted by bza at 1:23 PM