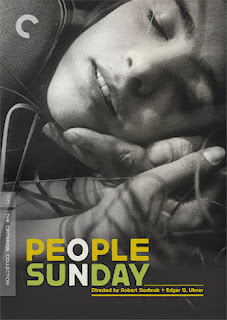 There's something hovering over People on Sunday that was entirely unintentional: the coming storm in Germany that would send a generation into darkness and forever transform the country. When the film was made in 1930, Germany had already been on the losing end of a major war, but a decade later Berlin had mostly moved on. This is not the Germany we were taught in school, the between-wars desperation of a populace that led to a weakening of moral strength that allowed Hitler to come to power. This is a middle-class Germany, a world of young working people (yuppies?) who steal away moments of leisure and do what young people do - flirt, lounge, consume popular culture. Upon release, it was a confection designed to reinforce the appeal of its audience's lifestyle - threatened by the market crash and looming Great Depression. With hindsight, it's a bit terrifying - like seeing movies set at the World Trade Center in New York.

The movie itself is perhaps more interesting as a social document than a piece of entertainment. The story couldn't be simpler, and it's augmented by documentary footage of people going about their business in Berlin, 1930, which is just as if not more interesting than the tale of four youngsters out in the country. Probably most famous for the talent associated with it (along with the two directors, the film was co-written by Billy Wilder with camerawork by future director Fred Zinnemann), the movie is a unique look at a moment in history with a few clever plot threads. But it doesn't amount to much more than a snapshot of a very unique moment in history.
Posted by bza at 10:52 AM