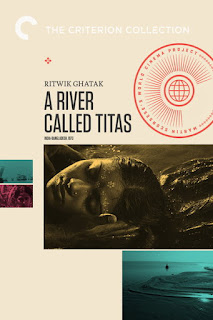 If there is a standard criticism of the most famous masters of the East, most notably Akira Kurasawa and Satyajit Ray, it is that they are deeply affected by the presence of the West. There is a sense that these directors have either been so deeply influenced by the Western concept of cinema or are so conscious of the Western gaze that their work is not truly representative of not just their national cinema but of their countries at large.

I tend to reject such criticism - unwrapping the influences and flowing ideas of international cinema is as difficult as separating the contributions of R&B and country to rock's creation. But watching a film like A River Called Titas makes it harder to ignore the idea that there are films that have a stronger national identity. Ritwik Ghatak's film documenting the lives of a small group of people living along the river Titas is a definitively Indian experience, as unconcerned with conforming to outside aesthetic rules as it is dedicated to its subjects' quiet lives and stark landscapes.

The most remarkable films of this nature can be invigorating, but even the greatest can be difficult to approach from a Western perspective. Without cultural touchstones, films can be as indecipherable as the language their protagonists speak. Consequently, A River Called Titas is not easy to fall in love with on first viewing. What can be appreciated, however, is Ghatak's love of his subject, the beautiful care with which he treats the manmade and natural surroundings he captures. Halfway through the film I grew tired of the melodrama of the story and spent most of my time simply living in the world A River Called Titas depicted. This is an underrated power of cinema; underutilized because viewers are so rarely exposed to films of this nature and resisted because of preconceived ideas about what movies should provide.

I didn't fully stay with A River Called Titas, but I took away from it a profound sense of place. It's the idea that each film I see makes the world a bigger and more complex living organism that draws me to a film like A River Called Titas, even when I have difficulty translating its appeal to fit my Western expectations.
Posted by bza at 8:25 AM No comments: