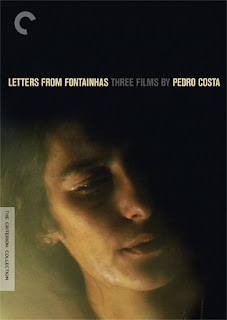 Letters from Fontainhas is the kind of set only Criterion would release. Without a company like this, these three films would be issued in bare-bones, poorly designed separate discs - if they were released Stateside at all. To the market's credit, there's a pretty good case for this fate - there aren't many people who would want this box set, and even those people probably wouldn't argue that they watch it on a regular basis (it's only found in 200 or so collections on the Criterion site right now - 500+ is more typical).

So why is this informal trilogy worth releasing? On quality, these are vital films that say something desperately unique about the nature of cinema at the turn of the century. They demand attention from film historians and makers alike, and even if they are difficult - and they are certainly that - there is something invigorating about their grammar. As a product, Criterion is not in the business of releasing (only) films that will sell well or are guaranteed to generate a huge response from cinephiles. It's in Criterion's best interest as a company to release films that reinforce their brand as a continued arbiter of significant film. Letters from Fontainhas easily satisfies this motivation - it's a stunning collection from a lesser-known but extremely well-respected director from an under-exposed film industry.

But as a contribution to the home-viewing film audience, this release's worth is self-explanatory. Costa has received so little attention that even Manohla Darghis, in her NYT review of Colossal Youth, admitted that she had not seen any of Costa's previous films. This is exactly the kind of unsexy release that Criterion almost seems to have an obligation to produce - a beautifully rendered, impeccably packaged collection of movies that never would otherwise receive the kind of loving high-profile release they deserve, put out simply because it is good and worthy of that release.

Watching the films in order is even more rewarding than the individual films. As a triptych, they represent the evolution of an artist's approach to an otherworldly setting. All three have similar difficult pacing and deliberate camera work, but each film is clearly distinct. Ossos is certainly the most conventional. In Vanda's Room is a conscious rejection of this conventionality, exploding into a messy but intoxicatingly ambitious statement. Colossal Youth is the culmination of this journey and the most fully realized of the three, the moment when Costa emerged from his experimentation with a fully formed and wholly original cinematic grammar.

I want to see all three of these movies again, but I think I will wait until I can see them on the big screen. Despite the digital nature of the last two, these are big films meant to be shared in the darkness, and demand attention to deliver their rewards. In Vanda's Room in particular is a difficult viewing at home (and probably would be in theaters), but so are Solaris, 2001: A Space Odyssey, and The Thin Red Line. What's so impressive about Costa is that he manages to project the same epic potential with seemingly intimate and quietly ambitious subjects.

Ultimately, this box set sells itself - either you are the kind of person likely to pick this up and fall in love with Costa's voice, or you are part of the large majority of even Criterion loyalists who will pass over it for something a little more willing to give up its secrets. Both groups are right, which is what makes Criterion's release so welcome and impressive.

Ossos
In Vanda's Room
Colossal Youth
Posted by bza at 7:57 AM