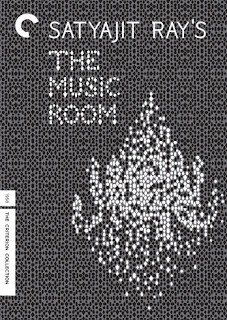 India is famous for being one of the most prolific filmmaking countries in the world, often making over 1000 feature length films in a year. It's also home to over a billion people, and is increasingly developing into an economic powerhouse. Yet Criterion features just two Indian movies in their 600+ spine numbers: Monsoon Wedding (made by Mira Nair, who lives in the US) and this one, the recently released The Music Room. (China, just as relevant as an economic power if not as a cinematic one, technically has just one, In the Mood for Love, since The Last Emperor was an international production and, of the other four Chinese films in the Collection, three were made in Hong Kong before it reverted back to Chinese hands and one was made on the disputed island of Taiwan.)

Part of the reason for the lack of Indian films in the collection (along with all the licensing issues associated with any difficult-to-reach corner of the film world) is that most of the films made in India are not very good. Like music, film in India has an entirely different grammar and set of building blocks to construct a movie out of - only unlike music, these elements were borne out of populist success and cultural limitations. This makes the majority of film from the country bogged down in meaningless dance sequences (nevertheless set to awesome music) and love stories that lack even kissing. This goes a long way towards explaining why Satyajit Ray - unquestionably the most highly regarded Indian filmmaker in the world - never got a particularly strong reception in his home country, unlike Kurosawa who was frequently criticized as having a Western slant but remained justifiably revered in Japan until his late-career skid.

But Ray's film isn't in the Criterion Collection because they needed more Indian films, and it wasn't selected because it felt more Western. In many ways, The Music Room is a response to the culture of Indian film at the time; it may have even been intended as a way forward for an industry that had yet to gain respect on a grand stage. It's also not, as some have argued, a consolation prize for the assumed impending Apu Trilogy Criterion release. The Music Room stands on its own as a powerful depiction of a dying class and one man within it. It's also beautiful and haunting, a great film that deserves this release on quality alone.

I think what I liked most about The Music Room was the house Ray used and the way he used it. His protagonist floats through it like a ghost, already resigned to his fate as a disappeared creature, the last of his kind. No one wants to be the one to close up shop, and the slowly decaying house around him is constant reminder of these final days. Small touches like the spider on the portrait, the cobwebs and dwindling candles in the chandelier, and the slowly cracking walls are just perfect for the film's elegiacal tone. The technical work of The Music Room is perhaps not as sophisticated as what was coming out of Europe at the time (nor is it as overblown as what was coming out of Hollywood), but Ray is obviously a powerful force behind the camera, and I'm looking forward to the Apu trilogy, whether or not we get that dream Criterion set that would help make amends for their sins of omission to this point when it comes to virtually every country from the Asian mainland, but India in particular.
Posted by bza at 11:28 AM