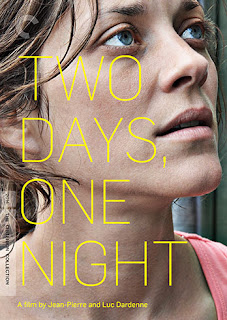 I end up saying this a lot on this blog, but here we go again: Two Days, One Night is the kind of film that would never be made in Hollywood. What's most interesting about that statement here, however, is that Hollywood really should be making films like this, and in fact often used to.

The basic premise of the film is that a woman who has been on medical leave from her job finds out that her boss had the other workers vote on whether they would get a bonus or have her come back to work. Now she must go around to all of her co-workers to convince them to forgo their bonus so she can keep her job. It's the kind of small, human-scale premise that is never made in Hollywood anymore, but its build to the vote and her quiet desperation lend the film a suspense and emotional connection that is totally lacking in what is actually produced these days.

The film lives or dies with Marion Cotillard. She's in every scene and even rarely off camera, and because we don't really get a chance to meet her before she is thrown into her challenge (another thing Hollywood would never allow) Cotillard needs to spend the rest of the film building up her character's backstory and giving her actions more than just a surface "I just want my job back" air. The film might have been more successful with a less glamorous actress - Cotillard's star quality and beauty makes it hard to see her as anything other than the protagonist in the film, like Brad Pitt in Benjamin Button (while both are great performances, Pitt's was more acceptable with the context of Fincher's hyperreal fable). Still, it's easy to forgive this casting when the technique both in front of and behind the camera is so impressive. The movie's episodic nature almost turns it into a mystery thriller, with each co-worker another piece of the puzzle, but the Dardennes' humanism makes Cotillard's journey more realistic and even urgent than any whodunit could ever be.

I don't know if Two Days, One Night rises to the level of the best films by the Dardenne brothers, but I can confidently say that cinema needs more films like this. Cotillard's journey recalls that in The Bicycle Thief but lacks the melodrama of that era, instead reaching for a technique that approaches verite, a reminder that, even for these former documentary filmmakers, fiction often resembles life more than the real thing.
Posted by bza at 8:53 AM No comments: 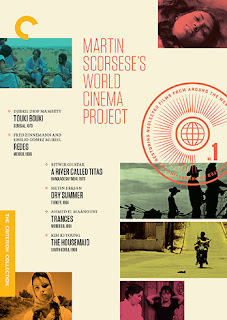 Martin Scorsese's World Cinema Project is a vital project with distinctly Western mindset. The notion that six films as diverse and distinct as these could be grouped together under any banner other than "cinema" is reductionist. Yet the care given to each and the spotlight shone on them by Scorsese's name and organization is impossible to dismiss as exoticism. The films in this collection (an assumed first in a series considering the 1 on its cover) are all unique and deserving of their restorations, and if the "world cinema" label ghettoizes them it is done while simultaneously elevating the value of perspectives different from what we typically see in film. Like world music, the title hopefully becomes a call for more diverse voices in cinema (in this case cinema history) and a tacit admission that the accepted canon is not definitive but instead sorely lacking perspective.

All six of these films (with the possible exception of The Housemaid) put their respective cultures at the center of their themes and subject matters in a way only rarely seen in the US. The similarity of the films stop there, however, as the stories range from music documentaries to experimental dramas to studio suspense. Of the bunch, Dry Summer stood out for me as the masterpiece. I was hooked on the story from the beginning, and the technique on display was more compelling than Hitchcock's Marnie, made the same year. But overall this box is a great release worth digging into, and the thought and effort put into preserving these films and giving them a wider audience is arguably the best thing Scorsese has done since Goodfellas.

Links to the individual films: