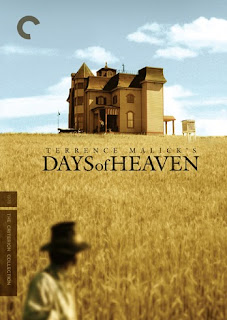 Since I began this journey, all three of Terrence Malick's 20th century films have been added to the Criterion Collection. This is a major coup for the series, but it's also great for movie fans looking for superb renderings of three of the best films of modern American filmmaking. Malick is undoubtedly one of the great narrative film artists this country has produced, and perhaps more importantly one of the few truly unique ones.

All three movies are classics, but Days of Heaven is the one that stands out as perhaps the most beautiful movie ever made. I first saw it when I was around 19 or 20 after being told by one person or another (or perhaps after reading in one book or another) that it was "The Greatest Movie Ever Made." I've probably watched only a handful of movies with such a lofty recommendation in mind (Citizen Kane of course being the old standby rite of passage), and it can often make a first viewing somewhat disappointing with such high expectations. Days of Heaven was not disappointing.

The film is mainly known for its cinematography, and this is well-earned. It's not entirely clear who deserves the credit for the film as shot (it's credited to Nestor Almendros, but Haskell Wexler apparently shot a great deal of the finished product), but what's on screen is stunning. Shot mostly by daylight, often with the sun just setting behind the horizon, Days of Heaven often has the kind of otherworldly glow for which the term "magic hour" was created. But even scenes not shot during this brief time of day can dazzle, like the shot which follows a girl as she jumps down a pile of hay, briefly catching the glare of the sun as it goes, or - most certainly - the climactic fire which finally and violently fully severs the connection between Shepard's magnate and his wife and her lover. The Thin Red Line argues that the true crime of war is against nature, but Days of Heaven surely believes that nature will endure, its gentle indifference saving it every time.

As Malick begins to put out films at a faster pace (his latest, To The Wonder, just arrived on iTunes), it's worth remembering how mysterious and iconic Days of Heaven seemed in the twenty years that separated it from Malick's follow-up. Like other relatively recent Criterion releases Repo Man and Vanishing Point, it seems impossible to imagine a major studio greenlighting and bankrolling Days of Heaven, and the film's powerful and beautiful rhythm is seldom matched by anything even Malick has made since. It's not only his best film, it's one of the few movies I think is unquestionably essential viewing.

One last thing: It's also worth noting that Ennio Morricone did the score, and its one of his most evocative and underrated works. Obviously best known for his Western work, Morricone here uses a similar Americana tinge to pull out the timeless and allegorical qualities of the story. Despite the fact that it is not featured as prominently as some of his other scores, I'd put it on the same level as those.
Posted by bza at 10:08 AM 2 comments: 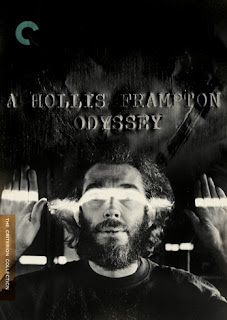 If you count By Brakhage as one set, A Hollis Frampton Odyssey is only the second collection of experimental shorts in the Collection. On one hand, this is totally understandable; it's doubtful that these sets reach the kind of wide audience even an arthouse release like, say, Badlands reaches; I assume compiling a set like this requires an enormous amount of curation, work obtaining rights, and other behind the scenes efforts; and perhaps most importantly many of the greatest and/or most well-known experimental filmmakers have work that either isn't meant to be seen in one sitting (e.g. Andy Warhol) or simply doesn't translate to home viewing (e.g. Nam June Paik). Currently, the set is in just under 400 collections, placing it on the low end of the spectrum, especially for an in-print recent release.

Of course, none of this matters when examining the films that are included here, and when the set is evaluated on its own merits it's pretty special. Frampton's work is notably different from Brakhage's deeply personal and tactile films - though there is certainly an auto-biographical component to Frampton's films, most notably in one of the best included pieces, (nostalgia), in which Frampton has an actor read descriptions of photographs from his life as they are shown burning away on a hot plate. The twist of the film is that the description corresponds to the photograph shown after it, making the viewer work to reconcile what has been said with what is being shown, while retaining enough information to do the same with the subsequent photo. It's a frustrating juggling act as a viewer - though not nearly as frustrating as another film in the same series, Critical Mass. The film combines three of the least appealing things in existence: improvisational acting, lovers' spats, and dischordant editing for an interminable half hour of nails on a chalkboard. I barely made it through this cinematic equivalent of Metal Machine Music even after tuning out halfway through.

The core piece here is Frampton's masterpiece Zorns Lemma, which runs over an hour and is the only selection available on Hulu. It's a brilliant exploration of form that should be required viewing for artists interested in photography of any kind. The majority of the film is dedicated to shots of letters of the alphabet as found on signs in various fonts and conditions, often but not always in alphabetical order. This sounds dull, and it kind of is, but it's also beautiful and oddly inspired. Like the rest of Frampton's films, there's certainly more to the explanation of the film than I am providing, but I think it's important to approach work like this with a totally clear mind and then search out people far more dedicated and informed than me to explain it should the need arise. Most of the time, however, I prefer my gut response to non-linear film to the explanation of it, however correct or intelligent the explanation seems.

There are other shorts here, some more appealing than others, but every one interesting in its own right. Most importantly in terms of his inclusion in the Collection, Frampton infuses his work with much more humor than Brakhage (at least based on the first volume of the latter's work), providing a much needed counterpoint to broaden the range of experimental film represented. On the whole, I would say I prefer the Brakhage set, but this is still a great collection that shouldn't be overlooked by people who are open to this sort of thing.
Posted by bza at 10:50 AM No comments: