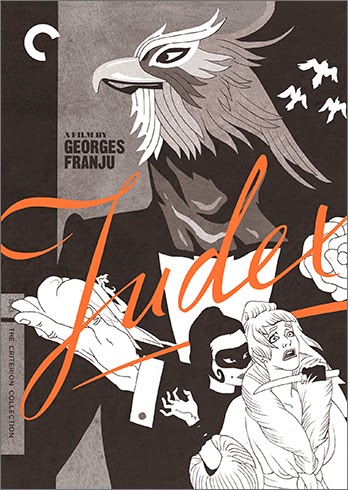 Judex is basically a French version of The Shadow, an early prototype of the superhero genre that would define comic books for the modern era and is currently holding the summer box office in a choke hold. This remake of the original film adaptation of the character is a movie in love with movies, the illusion and freedom that define the artform.

I had never heard of Judex (or even the character) before the title was announced, though it wasn't a totally left-field choice considering Franju had directed Eyes Without a Face, an early addition to the Collection. I enjoy that movie a lot, and what little I read about it before watching had me thinking this was going to be one I really loved. It sounded like a stylish and playful mind game that didn't bother to follow the rules of logic or realism.

Ultimately, though, I just sort of really liked it. The core story of the film is interesting but doesn't lead to much, as a lot of the explanation of backstory that was supposedly included in the original film has been nixed. This makes the movie a bit more like a fever dream, which is cool enough but doesn't allow the experience to add up to much. There's also a woman at the center of the film who is pretty much everything you could ask for in a stereotype of woman as a ruthless bitch, which is either a coincidence or a symptom of the time. But the movie is so pulpy and silly that it's hard to criticize it for anything other than not being pulpy and silly enough to elevate it to something really special.
Posted by bza at 6:36 PM No comments: