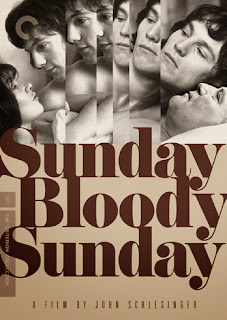 There are three great performances at the center of the film, and that's what is most important about it. The best comes from Peter Finch, who is better here than even his much flashier Oscar-winning role in Network, which was his last movie. Finch chooses to approach his character, stuck in the closet with his Jewish family, reserved in his medical practice, finally unable to accept the notion that he could be fully happy in his romantic and personal life because of it, without piling on psychological hang ups that are unnecessary. His character has been forced into his position exclusively by society - he is desperate for happiness but aware of his limitations, resigned to them. Glenda Jackson's character, meanwhile, is desperate for happiness but certain she deserves it. She's worried life is passing her by - Finch knows the train left long ago. They are two memorable and realistic characters intended as two sides of a coin flipped by Murray Head's character, who flies through the film without the slightest awareness he's in it. All three roles are written and executed with such mature and thoughtful care that it's almost infuriating to think how impossible it would be for the film to be made today.

The kiss is worth discussing, because it's rather innocuous. Though shocking in its time, it is perhaps most surprising now because 1971 feels early, not because of anything on screen. I don't know if I should be asd that this simple gesture between a couple would ever have been controversial, or if I should be angry that quiet character-focused scenes like this just aren't made in mainstream film anymore, regardless of whether or not it's between two men. The sex in the film might have made it an anomaly in 1971. Today, its quality does.
Posted by bza at 11:40 AM