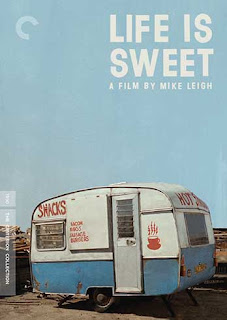 I'm not a Mike Leigh fan. Tangentially descended from the Cassavetes line of filmmakers, Leigh brings that unique brand of quirky humor and working-class angst to the classic style of amorphous plots, semi-improvised dialog, and an emphasis on human interaction over story action. Whether or not you like his films will most likely depend on how much you like his style, because the movies don't offer many other ways into the story.

Given, this can be said of many of the greatest directors ever, most notably Yasujiro Ozu. My recently discovered love of Ozu is a big reason why I'll keep giving Leigh a try. But another big reason is that there are moments in all of his films - and I've seen nearly all of them since this one, his breakthrough work - where sunlight breaks through and his characters are exposed in all their messy beauty. In Life Is Sweet, it happens near the end of the film, when the mother has finally had enough of her troubled daughter's empty life. Their exchange is so honest and heartbreaking that it's instantly recognizable to any parent or child, regardless of how different it is from your own situation.

That's where Leigh shines, finding the parallel humanity regardless of his subject matter. Still, his movies are so intentionally messy and small that I have a hard time sticking with them through their running times. Life Is Sweet is a really good movie, but it's not the kind of movie that gets me excited.
Posted by bza at 11:14 AM No comments: 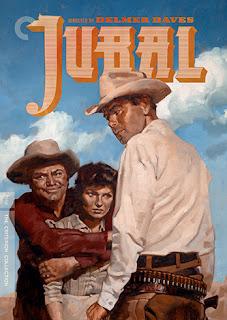 Of the two Daves Western added to the Collection this month, Jubal is both the lesser-known and the lesser. Although the story is rooted in a complex story of jealousy and love that would have, as Criterion mentions, fit right into a Shakespeare tragedy, it's disconnection with core Western themes and an absence of any real social commentary makes it a fairly disposable installment in the genre.

But if the movie doesn't quite measure up to it's follow-up, 3:10 to Yuma, its performances nearly do. Ernest Borgnine and Rod Steiger in particular are really great in secondary roles, but Glenn Ford holds his own in the lead. It's also interesting to see Borgnine and Steiger in the same movie since Borgnine is probably most famous for Marty, the Oscar winning movie in which he played the titular role - a role originated on TV (in a show included in the CC Golden Age of Television boxset) by Rod Steiger.

After watching Ford in these two movies, I definitely see his appeal, but it also cements his place for me as a second tier star. He's unquestionably attractive and his acting chops are there, but he lacks the onscreen presence of the great established stars of his time (e.g. Jimmy Stewart, Gary Cooper, Cary Grant) or even the younger up-and-comers like Marlon Brando and Montgomery Clift. His performance here is serviceable, but doesn't feel big enough to carry the movie and create a center of gravity for the other characters. In this way, he reminds me of Alan Ladd in Shane, an overrated movie that might have been a true classic with a stronger lead. Jubal isn't that good of a movie, but it might have been more memorable with someone else in the lead role. As it stands it's a solid Western, but it's not much of a surprise that the film has been overlooked until now.
Posted by bza at 11:11 AM No comments: 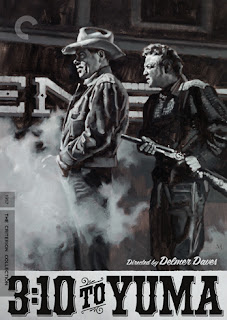 3:10 to Yuma is probably best known at this point as the original version of the recent Western starring Russel Crowe and Christian Bale. This makes a release of the first version a perfect occasion to forget about that history and focus on the film itself - something that is a real pleasure to do. Delmer Daves has been mostly forgotten in film history, especially as a director, since his most famous screenplay work was on Love Affair, which was directed by Leo McCarey. Prior to the remake of this Western five years ago which gave the original a higher profile, his highest profile film was probably Dark Passage, most notable as one of the few Bogart/Bacall onscreen team-ups and as one of those rare mainstream narrative films that spends much of the time with a first-person perspective.

3:10 to Yuma proves that Daves was better than mere gimmicks; this is a beautiful and striking film directed with razor precision both in terms of the way Daves deals with the suspense of the narrative and how he treats the Western iconography so familiar by 1957. The film's storytelling is intricate and sparse - more reminiscent of The Friends of Eddie Coyle than High Noon - which is not especially surprising considering the film is based on an Elmore Leonard story. Daves lets both his cast and his geography come to him, with only an overwrought (but typical of the era) score get in the way.

But the core strength of 3:10 to Yuma lies in the two performances at the center of the film. Although I've seen Glenn Ford here and there in a number of films (most notably Gilda) this has to be easily his best performance I've seen. My wife pointed out that his character has the same calm unpredictability that made Heath Ledger's Joker so effective in The Dark Knight, and while he might not rise to that level as an iconic villain, the film's success is largely due to his magnetism and air of danger and violence buried underneath the surface. Van Heflin, meanwhile, holds his own in a role fairly typical of his career at the time, when he spent more time in cowboys than out of them. His rancher has a dark side (enhanced by his wife's stereotypical and vaguely sexist prodding) that gives the film an added psychological kick.

It's probably the hint of darkness in both characters that makes the ending somewhat disappointing and unbelievable after what has come before. But the final sequence is filled with so much tension and executed so well that it's hard to fault the film too much for delivering the requisite happy ending. 3:10 to Yuma is a great addition to the criminally small but slowly expanding Criterion Western contingent.
Posted by bza at 11:49 AM No comments: 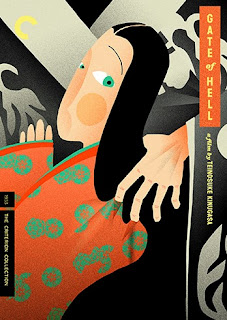 Gate of Hell is most noteworthy for its visuals. As one of the first color films to be exported from Japan, the movie takes full advantage of its format by presenting costumes and sets that positively glow in vivid HD. The impact of these visuals has not been lessened by countless followers: the film's design aesthetic is even more impressive than the recent Criterion release The Ballad of Narayama, and ranks with Kwaidan as one of the most impressive uses of color I've seen out of Japan. I watched the film on Hulu, but I'm sure it looks even more spectacular on blu-ray.

Despite being overshadowed by the imagery, the film's story happens to be pretty intense and engaging. The combination of a truly fascinating political feud which emerges from the scandal and the descent into madness of the protagonist, who had previously seemed so selfless and rational, makes the movie gripping and almost archetypal in its depiction of the samurai mindset.

One interesting question is how much Morito's actions in the last act of the film are actually the result of his descent into obsessive love as opposed to insecurity at his embarrassment. The emperor and his court spend a lot of time ridiculing Morito and trivializing the predicament instead of cutting it off before it has time to fester. The fact that Morito didn't know the woman was married makes his initial intentions more pure and his later actions (after he has already been laughed at) less clear.

In some ways, Gate of Hell reminded me of Dangerous Liasons. There is a cynicism pervasive in the high classes here that dehumanizes the three people who are actually forced to deal with the love triangle at the center of their entertainment, and while Morito certainly symbolizes the potential for evil within the masculine and militaristic tendencies of the samurai (which per usual is a stand-in for Japanese culture as a whole), the men who surround the core characters seem to be portrayed in a light that is even more damning. This exploration of what is essentially male gossip might not help Gate of Hell achieve with its story what Kinugasa achieved visually, but it makes Gate of Hell a great watch, and more than just a pretty face.
Posted by bza at 7:26 PM No comments: 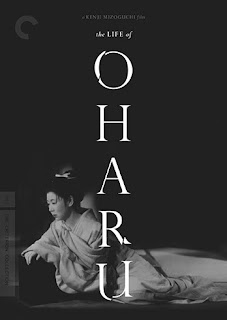 Most tragedies follow a basic template. A protagonist begins in a certain place - whether it's a normal steady place or immediately after something difficult has happened to them - and they encounter some sort of disaster that throws their world into chaos. The rest of the movie is spent dealing with that chaos, and the protagonist eventually either recovers or succumbs to their challenges in some way. A good recent example of a typical tragedy in the Collection is Secret Sunshine. A woman moves to her deceased husband's hometown to raise their child there when something horrible happens that propels her forward through a spiritual and existential journey. There are multiple heartrending moments in the film, but - like the majority of similar movies and stories of any kind - it's the one central tragedy around which the film revolves.

The Life of Oharu has perhaps ten, maybe even fifteen moments like this. Oharu is betrayed, misled, punished, humiliated, and victimized by random fate so frequently in the film that Mizoguchi's portrait nearly collapses under the weight of absurdity. Mizoguchi's steady hand and the main performance of Kinuyo Tanaka, who worked frequently with the director (she's in all of his films in the Collection), ultimately save the film from the type of sensationalism reserved for similar exploitation movies disguised as social commentary (see: Precious), but the comparisons are still evident. While Mizoguchi has honorable intentions, his portrayal of the plight of women in Japan has little of the complexity and sharp bite of Imamura or Oshima. This is mainly because the film is so melodramatic that it doesn't feel real, the message so obvious that it's hard to take away any applicable lesson.

By the way, this movie is really, really good. I know it doesn't sound like I think that, but it's beautiful and humanistic and it's impossible not to feel a strong attachment to Oharu. Each story within her journey ranges from moderately interesting to stirring enough to be the basis for its own film. And like Mizoguchi's poetic masterpiece Sansho the Bailiff, the film's imagery is lyrical and indicative of Japan's beautiful visual iconography. It's just that when you're finished, you're going to need a long bath.
Posted by bza at 10:38 AM No comments: