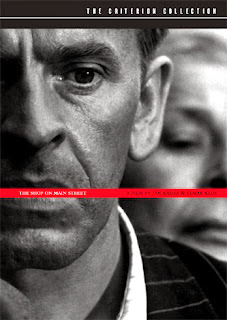 Along with Closely Watched Trains, The Shop on Main Street is one of two Czech films Criterion released in tandem early in Criterion's DVD run that primarily revolved around the country's role in World War II two decades earlier. The two films were made a year apart and, along with a number of other 60s films, signaled the emergence of the Czech New Wave, a movement which has since been represented in a well-regarded Eclipse box set.

Beyond these similarities - which are by no means superficial - the films share little in common. Closely Watched Trains had a light and wry tone, and even in dark moments the film never felt heavy or especially serious. Conversely, The Shop on Main Street is one of the most intense films you are likely to see - about the Holocaust or anything. It doesn't necessarily start out that way, but as the film descends into conflict and the protagonist takes his stand, there are few more disturbing and emotional climaxes in the Collection.

This isn't what makes The Shop on Main Street a masterpiece, though. That's a combination of the beautiful and skillful direction, mainly by Kadar, and the lead performance by Jozef Kroner. Kroner's work, in fact, threatens to overtake everything else about the film - he's that good in this role, which requires a wide range of emotion and physical and mental states. This alone would guarantee the movie a place in history, but the direction is so intricate without being overbearing that this is a masterclass in filmmaking from a lesser-known director. When compared to the simplistic work in Closely Watched Trains, it's a good reminder that just because Czechoslovakia was blooming as an international cinematic voice doesn't mean they weren't already a diverse and talented group with very different aesthetic takes and levels of sophistication.

The Shop on Main Street, I should also point out, is the best indication yet that I am not "scraping the bottom of the barrel" as I near the end of the Criterion Collection. I put this film off for so long mainly because it is not available on Hulu or Netflix, meaning I would have to rent it in order to watch it, unlike most of the other Czech films in the Collection. While the film isn't as high profile as even some of those films, and certainly not as well-known as, say, Breathless or Seven Samurai, this is one of the best films Criterion has released, and, I think, essential viewing for anyone interested in film.
Posted by bza at 1:38 PM