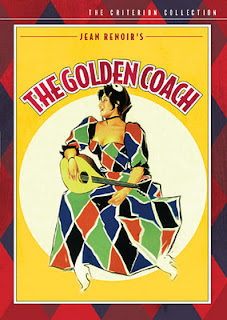 Jean Renoir made two of the greatest films ever in the 1930s, The Grand Illusion and Rules of the Game. While they reside in different genres, both films were about class, and both dealt with the core of human nature, speaking to universal truths that go beyond cinema and infiltrate every facet of life and art. They are towering achievements in cinema, just two of the many jewels in Renoir's catalog that is one of the five or ten most widely praised oeuvres in film.

Because of these works, Renoir's later-stage trifle The Golden Coach seems to demand serious consideration from critics, who assure that something deeper lurks beneath the colorful veneer of Renoir's universe. They may be right: certainly the film's central character, played by Anna Magnani, represents the larger struggle of the actress, really the performer, perhaps the artist But I think these in-depth deconstructions of the film do a disservice to its more overt intentions. The Golden Coach may be an exploration of the artist, but it's also a wacky farce that plays with the barriers between stage and screen, reality and fantasy, what happens onscreen and what happens in the dark as we see the story unfold. These can all be heavy topics, for sure, but Renoir deals with them in such a light-hearted and entertainment-minded way that dwelling on them would seem vulgur next to the purity of the film's story.

Not that The Golden Coach is virginal. While not necessarily a sex comedy, the film has its share of nudge nudge wink wink moments. And by the time Magnani is shuttling back and forth between her prospective lovers, the movie has made it clear that higher aspirations are not particularly of interest. Like the colorful and apt Criterion cover, the purpose is to dazzle, if only for an hour or two.
Posted by bza at 10:10 AM No comments:

A Generation is an almost annoyingly ambitious title for a film, particularly one that is 90 minutes long. How do you encapsulate the experience of an entire generation in any narrative? Yet because World War II was so all-consuming - and perhaps more tragic than the experience of any other country - in Poland, it seems like the perfect title for Andzrej Wajda's first film. The kids (for that is what they are, regardless of age) depicted in A Generation do not ask for their roles in the war but have them thrust upon them. Wajda's two protagonists, Stach and Jasio, meet different fates during the course of the film (one of them chillingly depicted in the cover of the Criterion disc) and approach their engagement with their country's struggle in different ways. But their attitudes reinforce the basic message of the film: there was a real, interpersonal experience behind the myth of war, a reality that was elevated through happenstance to historical proportions.

This manifests itself in two ways. First, on a micro level, Wajda gives his characters authentic motivations that rarely have much to do with politics or nationalism. They fall in love, they take care of their families. They are selfish, cowardly, angry, seen putting on gangster personas and speaking of concepts beyond their understanding, constantly reminded of the war that is burning the Earth in the background. But on a micro level, this message demands attention because few films in history have been so genuine in their depiction of a reality transformed by war. Though America has been fighting wars since the 1940s on virtually a continual basis, war hasn't actually been felt by the US since the 1860s. This means it is impossible for Americans who were born and raised in this country to know what it would be like to live every day experiencing war on your own soil. Obviously a movie cannot hope to change this, but the moment when Jasio begins to be chased by soldiers and ends up in a shootout is an escalation of what has come before to such an enormous degree that (especially when coupled with the metaphor of the spiral staircase) the true experience of this generation begins to set in.

The tragedy of Poland's experience in World War II (something that is cleanly explained and explored in Criterion's essay on the film) can often be overlooked in history because of the parallel - and  inextricably intertwined - tragedy of the Holocaust. Without argument, nothing towers over the various atrocities of the 20th century like the Holocaust - an organized, pathological extermination of almost an entire race of people. One of the most incomprehensible tragedies of the Holocaust is how few Europeans (especially of course Germans) rose up to prevent this mass murder, but the notion is especially terrifying because it is impossible to know what truly could have been done and whether or not you personally would have been able to sacrifice yourself to stop it. Certainly Poland and its inhabitants had a great deal of guilt - justified and/or unjustified - after the war because of their inability to prevent the elimination of virtually their entire Jewish population. But they also had an enormous amount of suffering to overcome themselves, equally measured against their own abandonment by the international community throughout the war (peaking with the Warsaw Uprising, which was the subject of Wajda's next film, Kanal).

A Generation is especially impressive because it was made primarily by Polish people in their 20s in 1955 just a decade after the end of the war - an incredibly short amount of time to process such an immensely destructive experience. Yet Wajda's reflections on the impact of the war among countrymen who were not much older than him seems so fully formed that this alone makes the film an incredible accomplishment. Technically, A Generation might be regarded as a shade below classic, the work of an artist blooming but not quite at his peak. But in terms of historical relevance, A Generation joins Au Revoir Les Enfants, Rome, Open City, Ballad of a Soldier, and Army of Shadows as essential Criterion portraits of World War II, helping to form a fuller picture of the most transformative and tragic event of the last century.
Posted by bza at 7:50 PM No comments: 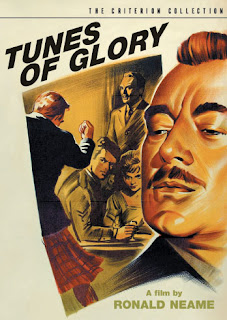 Tunes of Glory belongs to the long tradition of classy productions which has defined British cinema for many viewers in - depending on one's views - either a derogatory or exemplary fashion. I choose to place myself somewhere in the middle, recognizing these works for their superb technical achievements (which ironically mostly consist of hiding the technicality of filmmaking) but often bemoaning the starched thematic constructs and old-fashioned pacing.

Characteristically, then, Neame's Tunes of Glory is alternately quite moving and somewhat emotionally distant. The film contains some truly fine performances, including one from Alec Guinness at the center which may be his best I've ever seen. But the script can get bogged down in the development of the characters' motivations and interactions. This often leads to the film feeling oddly theatrical at times, despite its origins as a novel. Even the worst of these moments, however, are carried by Guinness and John Mills in particular and the cast in general, as films of this nature so often are. Neame's direction, in a similarly typical fashion, is invisible to the casual viewer, but manages to reinforce the separation Mills feels from his men and the arrogant camaraderie Guinness employs so naturally to his benefit.  It's a thankless task in a field too often judged only on auteurism - and it's why his work has largely fallen into the middle of the historical pack - but it makes Neame an admirable craftsman.

Judging a film like Tunes of Glory - or for that matter any film of a similar nature - by modern standards of drama can often be unfair. Today's audience is used to seeing protagonists of either common or particularly exceptional nature - the everyday middle-class professional or the famous musician/politician/artist. Very rarely are we exposed to emotionally distant men tasked to a higher calling who are struggling within their own humanity and social constraints, and when we are (as in work like Mad Men) it is often through the prism of modern rhythms and perspectives. So when a film like Tunes of Glory explores lower-c conservative life it is more difficult for the broader audience to see its message as a timeless one beyond the social construct it inhabits - one of those "forest for the trees" situations. In this case, it's a beautiful forest, it's just that some of the trees have lost their luster.
Posted by bza at 8:55 AM No comments: