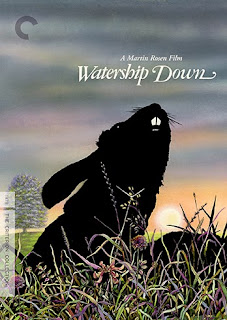 It took 700 films for Criterion to release its first full-length feature animated film, Fantastic Mr. Fox, which slipped through thanks to Criterion's close relationship with Wes Anderson. This is partially because of the difficulty of licensing the most important animation, the bulk of which is behind the Disney paywall or obscure Japanese agreements (occasionally the two combine to make it even more difficult to obtain animated features - note that none of Miyazaki's best work is available digitally). Mainly, however, the lack of animation in Criterion's stables stems from two things: the unfair perception among cinephiles that animated work is inherently artistically inferior and the skew toward family appeal in the genre. This latter element is a barrier both artistically (as the bulk of animation is slight) and financially (as the home video market for family entertainment is much more robust than that of foreign film).

With these barriers in mind, it's not much of a surprise that the first truly animated (i.e. hand drawn) feature to arrive in the Collection is Watership Down. Wielding both the literary heft and adult-focused themes that separate it from the typical animated film, Watership is the perfect fit for Criterion on paper. The good news is that in practice it's also fully worthy of the label and a deserving "first" representation within the catalog.

Before the beautiful and trippy intro of the film is over, it's already clear that Watership is a unique animated film. The talking animal trope is as old as animated film itself, yet rarely has it been used in such a serious and adult-themed context. The rabbits of Watership Down are no less anthropomorphized than Thumper - in fact, the concept has been taken to its extreme, with the full weight of what it means to be human behind it. Here are animals with their own creation mythology, socio-political dynamics, and the full scale of human emotion. It's a stark reminder of what has been lost in the accepted (Western) truth that animation is inherently for kids.

The story of Watership Down is very engaging, and I found myself wrapped up in this dark tale of a group of rabbits struggling for survival. Although the animation is not perfect, it's also beautiful and carefully detailed. Rosen made another animated film based on a Richard Adams novel after this, but his career outside of these two films was also filled with literary adaptations (albeit live action). His care for the written word can often overpower his own artistic interpretations here, making the film a little by the numbers, but the imagination behind the story is so vivid that it never seems routine.

Although there are countless animated films that would certainly make the Collection if Criterion had free reign, most will never see the light of day. Still, there are many films that I'd love to see included that could conceivably make their way into the Collection: The Adventures of Prince Achmed is currently out of print, The Secret of Nimh is currently a clearance blu ray, while any of Bill Plympton's work would make for a great adult installment in the series. Regardless, Watership Down is a film any fan of animated film should see, and it's hopefully the beginning of a bigger trend.
Posted by bza at 8:54 AM No comments: