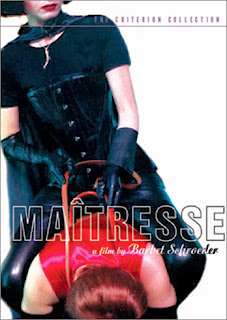 The fact that Maîtresse is a love story will be cold comfort to viewers watching a woman nail a man's penis to a 2x4. But it's true: Maîtresse at its heart is about two people falling in love and their desperate attempts to merge their worlds and come to terms with their differences - which it turns out in the end might not be all that great. Like In the Realm of the Senses, made just a few years later, Maîtresse focuses on two people almost exclusively as they become obsessed with one another. But where that film's couple took their obsession down a dangerous path, the two lovers here lead a very conventional life both in bed and out. You know, other than the pull-away coffee table in her living room that leads into the S&M dungeon where she abuses high-end clients by whipping them, keeping them in cages, and, yes, nailing their penises to boards.

Other than that one truly excruciating scene, the sadomasochism in Maîtresse is actually pretty mesmerizing and entertaining (though fair warning: there is also a very gruesome scene of a horse being shot and then bled out). This is perhaps most true when the couple arrives at a chateau in the countryside where a butler - who is clearly in reality the owner of the chateau - greets them and proceeds to take an enormous amount of shit from the woman, including having a cigarette put out in his hand. The scene shows how unique Maîtresse is, and how willing and even excited Schroeder is to open his viewer up to a seedy underworld all around us. The fact that the film doesn't feel the least bit exploitative about its subject speaks to the care with which he made the film.

I enjoyed Maîtresse a great deal despite its quite difficult-to-watch moments. But I'm not sure the movie says much of anything beyond presenting the novelty of its subject, one that is rarely approached in a serious way in popular culture. Gerard Depardieu, in a very early role for him, is also excellent here, another thing that makes the movie worth watching. Even though Criterion maintains their level of quality in releases like this, though, there does seem to be a weird undercurrent of films about sex that merit more consideration from them than they might otherwise get. I'm not saying Maîtresse doesn't deserve its release - this is probably a near-classic movie. I just wonder if there's something more to it - perhaps they see films like this, their recent Trilogy of Life boxset, and In the Realm of the Senses as works that might not otherwise get the serious consideration they deserve because they are overshadowed by their reputations as sex films.

By the way - what gives on the date here? Criterion has it pegged as 1973 on its website but their own essay says the film was shot in 1976, the year it was distributed internationally, while IMDB has it as 1975. Anyone have any idea when it was actually made?