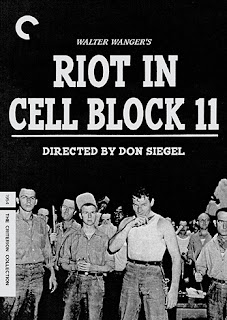 What a find. Riot in Cell Block 11 is a certain kind of film Criterion puts out rarely, but always with impressive confidence and great value to the marketplace. Created as a b-level social picture in the wake of a series of prison riots in the early 1950s that stemmed from poor treatment of the prisoners, this is a lesser-known early picture from Don Siegel, who would go on to direct Criterion release The Killers before producing the higher profile Dirty Harry and Escape from Alcatraz. It's not the best-acted movie I've ever seen, and it can often feel a bit preachy in its consistent social message. But it also rings just as true today as it did in its time.

The style of the film is a reminder that throughout film history movies that were considered lesser or even exploitative often had more to say about the ills of society than the prestige pictures of their era. The movie that won best picture the year Riot in Cell Block 11 was released was another future Criterion film, Elia Kazan's On the Waterfront, and while I'm not here to discount that masterpiece, I do think the message of Siegel's film is more complicated and more relevant in today's America.

The scenes with the warden are generally didactic, but it's the final scene, in which the warden explains to the leader of the riot that he has been betrayed, where the message is most loud and clear. It's the truth no one wants to believe but everyone should see as obvious: riots work. They work because people are afraid of society crumbling, and part of the way society stays afloat is that the people with less and who are forced to stay that way agree to keep the peace (at least generally speaking). That detente is broken only when things get so bad that the system needs a virus to run through its body and clear out all the toxins. In Riot in Cell Block 11 (as in the US of the early 50s), the oppressed community was prisoners, growing up in LA it was black people in the early 90s. As the movie shows, riots don't solve everything, but they do bring the kind of attention to oppression that only violence can bring.

People who think prisoners should rot in jail for whatever they did to get there will probably be able to ignore the message of Riot in Cell Block 11. For people like me, the film is preaching to the choir. Yet there is a whole middle of the population that simply hasn't considered these kinds of issues because they didn't need to. These are the people Cell Block 11 was made for, and just as the political message of riots had to be draped in violence, so too does a message such as this need to be drenched in noir and simmering with pulpy aggression. Does Riot in Cell Block 11 raise to the level of many of the classics in the Collection? Of course not. But it doesn't need to - it does what it was meant to do, now just as well as in 1954. This is a vital thread of film history in the American system, and this particular film represents one of the best, making it a great addition.
Posted by bza at 12:06 PM No comments: 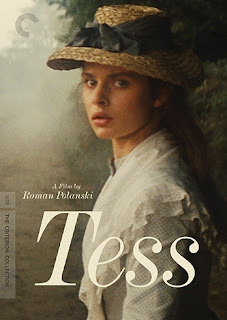 Look, I'm not the audience for Tess. I knew that going in. I held out some hope mainly because I do generally like Roman Polanski movies and one of the few costume dramas I do like was another Henry James adaptation, Wings of the Dove (a movie that had no business working as well as it did considering it was bookended by Hackers and K-Pax in its director's catalog). Was I worried about the nearly three-hour running time? Of course, but I prepped myself.

I might as well get the good thing out of the way first and just say the cinematography in the film - particularly the outdoor shots - are spectacular, and while they aren't as flashy as those in Days of Heaven, they rival them in their technical proficiency and sheer pleasure. Sadly, these scenes were mostly shot by Geoffrey Unsworth, who died in the middle of shooting the film (he also shot 2001), leading to another cinematographer taking his place for the rest of the shoot (they shared an Oscar for the film). This really is the best part of the movie, and I probably could have gotten along watching it on mute for most of the time.

Of course, it wasn't on mute, and that's were things get pretty depressing. I'm not one to entirely reject out of hand a nice tragedy, but I am fairly wary of the ones that revolve around a young woman and her sexual experiences (particularly when set in the past). When you add on top of the subject matter the awkward fact that the film was directed by Roman Polanski and it was 1) his first film since fleeing the US after pleading guilty to rape and 2) a movie he dedicated to his dead wife, who, after giving him the Henry James novel to make into a movie starring her, was promptly murdered by the Manson Family, well, things get a little complicated. I don't think the way the Alec is portrayed is problematic - he's a pretty straightforwardly bad guy - but I did find it a little uncomfortable how picturesque the scene was set for the rape sequence, however consciously this was meant to contrast with her experience. Overall, though, it was mainly how dour Tess's story was that got me down. I never really cared that much about her, so in a way it was even more tiresome to see her beaten down over the course of nearly three hours.

I do also have to say that regardless of how the Criterion essay felt about it, I didn't think Natassja Kinski's accent made her stronger in the role. She seemed out of place from the beginning and I didn't feel like Polanski picked her for any other reason than that she's a pretty lady.

It's funny, I was always a huge Roman Polanski fan growing up. Knife in the Water, Rosemary's Baby, Repulsion, and especially Chinatown were huge films in my development as a cinephile. As I got older, I discovered Bitter Moon and Death and the Maiden, and I even really really like The Ninth Gate in a trashy kind of way. But both Cul-de-Sac and this I found underwhelming, and I haven't liked any of his movies since The Ninth Gate (The Pianist is beautiful, but slight in its genre and certainly undeserving of the weird statement Oscar he received). Maybe if I had a different disposition Tess wouldn't have rubbed me the wrong way, and I'll be the first to admit that once those frills come out, it's hard for me to turn off the 12-year-old in me that just wants to put on Die Hard or whatever. But at the moment Tess just seems like another "life is hard for women, even if they're beautiful" movie, and I've seen enough of those.
Posted by bza at 5:41 PM No comments: