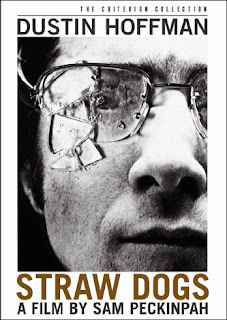 Straw Dogs is a hateful, despicable movie. It's often cited by its detractors as a prime example of exploitative schlock masquerading as challenging high-art, designed to get away with the very outrageous violence and misogyny it claims to be shining a light on in order to unsettle our unsuspecting but complicit sensibilities. In reality, it's much less effective than that. It's a sincere attempt at the latter, honorable intention - but one that fails on virtually every level. It might deserve the hate and vitriol thrown at it if it wasn't such a ham-fisted, cliche, almost lazy attempt to attack an extremely difficult subject.

The film focuses on a couple on the verge of collapsing, making a last ditch attempt to maintain their marriage by returning to the wife's hometown/country so the husband can finish his studies and they can have a nice quiet life. Of course, the backwards fucked up townies will have something to say about that, as they promptly begin to hang their cat, rape the woman (who of course decides she kind of enjoys it) and then lay siege to the house, willing to lay down their lives just to ruin Dustin Hoffman's day because he doesn't know how to do work around the house.

The film's intention is to make us all accomplices in this crime against humanity, which is to say Peckinpah sees only shittiness in humanity and sees it as his mission to make us realize our own shittiness. Art is not successful if its pure intention is to make you feel good about yourself, but the reverse is true as well. There is no complexity in Straw Dogs, and Susan George's character would come across as misogynistic if you aren't paying close enough attention to Dustin Hoffman, who is equally weak-willed and deplorable. It shouldn't be surprising that the film was remade during the recent torture porn revival - these are the empty bodies ready to receive violence and hate upon them and give back only blood and tears that have been so decried and fetishized through modern horror. Compare Straw Dogs to the far superior Wes Craven film The Hills Have Eyes (loosely based on Bergman's The Virgin Spring) and it's clear whose sensibility has taken over - Peckinpah's nihilism reigns supreme.

Many reviewers have defended the film against these many complaints. It should be noted that Hoffman justifiably receives praise - he does all he can with the role and it's one of his strongest performances. And like always, Peckinpah's direction and skill at manipulation is expert, if a bit dated. But the movie falls apart in the simplest of ways, and its worst elements are the ones designed to be ignored by the larger questions raised by the shocking moments that receive most of the attention in glowing reviews. These critics have forgiven the film its basic structural flaws in order to exalt its excesses. This is why people thrill over Peckinpah's elaborate use of jump cuts during the rape while ignoring the clumsy machinations necessary to set up the final showdown. They pass over the poorly defined villains, who come across just as ludicrous and Three Stooges-like as the Pesci/Stern duo they inspired in Home Alone, in order to dissect Peckinpah's depiction of George as a sexual creature first and foremost. Because Peckinpah's previous films are so brilliant (particularly The Wild Bunch, surely one of the most iconoclastic films in history), we are expected to forgive Hoffman's illogical character arc, which takes him from being run off the road by the thugs to hunting with them to taking a stand without much motivation. Straw Dogs is forced to become an "intellectually challenging exploration of human psychology" because, well, as a movie, it's pretty dreadful.

It all might be forgiven if the movie felt like it was making an original point, as ugly as that point might be. I could argue that Irreversible or Fat Girl or Requiem for a Dream was something we hadn't seen before, and maybe if I lived in 1971 I would feel differently about Straw Dogs. But all Straw Dogs feels like to me is an empty case against logical pacifism designed to terrorize rather than educate. It's the equivalent of the ticking time bomb argument for torture, and the plot here is just as convoluted and contrived as that scenario would demand. There is a case for violence, but this movie's argument is a poorly made house of cards caught up in a distracting and destructive hurricane. Don't let it get you caught up in its fury.
Posted by bza at 12:26 PM