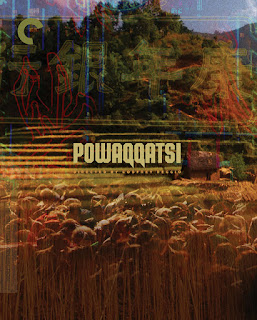 Powaqqatsi is not as much of a cinematic event as its predecessor, but it's every bit as visually stunning and hypnotic. Some of the cinematography is so impressive that it's a wonder how they were able to capture these images so effectively. I watched the film in a fairly strong transfer and one thing is clear: this is going to look INSANE in a Criterion blu-ray release.

Thematically, Powaqqatsi is just as obvious as Koyaanisqatsi, only here the film addresses technology's imposition on traditional cultures in the southern hemisphere. Without Koyaanisqatsi, the film could easily be criticized as exoticizing the native cultures and peoples it depicts. In fact, some of the ideas explored here and the ways in which kids and performers are presented can arguably cross this line anyway. But the care with which Americans were presented in the first film helps inoculate Reggio from many of the criticisms that might make viewing the film more uncomfortable - or at least less innocent.

Ironically, though, just as the comparison exonerates Powaqqatsi, it condemns it as well. The basic shift from a battle between nature and society to one between culture and technology implies a subtle but dangerous equivalency between nature and natives. I think a pretty good case could be made that the film is not able to overcome this fundamental assumption, but I tend to give Reggio credit as a broad thinker who doesn't intend to imply a connection between the two films' explorations of change. I'm also biased because the film is so beautiful and lovingly conveyed that it would seem counterintuitive to come away with anything but the impression that Reggio has the utmost respect for the cultures he depicts here. Perhaps the better case can be made against Reggio's characterization of the chasm between these cultures and "Western" or "Modern" culture than against the dichotomy of nature and man's impact on the world. But that doesn't make the film itself any less impressive - and it might just make it even more thought-provoking.
Posted by bza at 7:12 PM