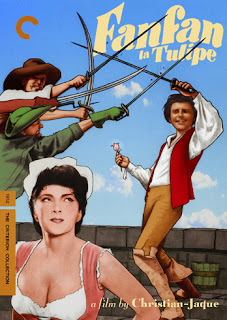 Fellow French New Wave fans, I have seen the enemy. I have looked it in the eyes and I have seen its tired soul. It's name is Fanfan la Tulipe and, well, it's really not that bad.

Fanfan la Tulipe is a rip-roaring swashbuckler with plenty of romantic intrigue and physical wackiness - only its wry narration satirizing war sets it apart from similar bloated entertainments coming out of Hollywood at the time. It's cheesy and pretty routine, but the structure and tone are cliché for a reason: they work pretty well to give you a good time.

What's mainstream and popular in one era probably doesn't entirely work in another, and, much like Gone with the Wind, this movie isn't going to work for the modern equivalent of the people who made this a commercial success sixty years ago. The plot drags, the action is sped up Benny Hill-style, and the ending is preposterously happy.

Films like Fanfan la Tulipe are crafts rather than art, and while the skill is just as impressive, it lacks any long-lasting relevance. Like The Rock fifty years from now, it's still objectively well-done, but basically an historical document of what put asses in the seats when it was released.
Posted by bza at 6:38 AM