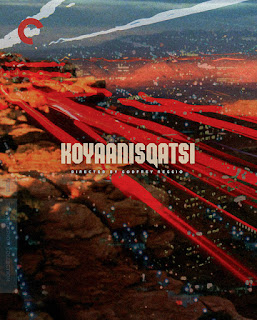 Koyaanisqatsi is not a subtle film. Anyone who watches it with just a passing interest will get what Reggio is trying to say. But assuming that Koyaanisqatsi is intended to deliver some sort of complex case for a more harmonious relationship with the planet seems to me to miss the greatest accomplishments of the film, which has to be one of the most beautiful, innovative, and awe-inspiring documentaries ever made.

The irony of explaining in words a film that has none is self-apparent - dancing and architecture come to mind. But the film as a cinematic experience can be discussed without much attention paid to its intended political message. Its success in this regard is pretty simple. First, the cinematography is stunning, particularly the time-lapse photography. Try to watch this film casually and not be mesmerized by what's happening on scene. This is inevitably aided by the music, which is perfect and certainly Philip Glass's greatest accomplishment in film. Finally, what Reggio has done with the footage in the editing room is the true work of art that holds the film together. It's pretty much astonishing that this film was created by three people who had never made a feature film before, as this is a master class in shot selection, pacing, editing rhythm, and visual impact.

The only downside of Koyaanisqatsi being released on Criterion is that this film would no doubt be that much more impressive on the big screen. Still, in the age of blu-ray and 46-inch TVs, having this film reach a wider audience will be worth sacrificing a bit of the cinematic impact. This is now one of the essential films in the Collection.
Posted by bza at 7:41 AM