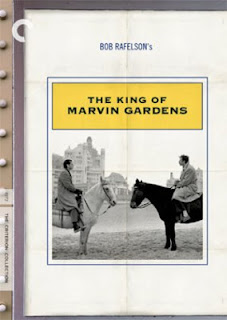 The King of Marvin Gardens defies reviewing. It's not a significant enough work to demand evaluation, but it's so carefully constructed and lovingly finished that it contains intricate details that might otherwise go unnoticed. It simply has to be seen to be understood, which isn't true of even many movies far greater than it. It's a crushingly sad movie about lost people that never really feels worth it. I loved it nevertheless.

The film opens with Jack Nicholson in a darkened room without context telling the story of how he and his brother allowed his grandfather to choke to death on a fishbone. Only when he is finished with the story do we discover that he is on the radio, telling his story to his listeners. Only when he gets home do we realize he lives with his grandfather.

The scene is significant for two reasons. First, Jack Nicholson is one of the greatest living actors, and it's apparent right from the beginning here. The scene is a great reminder of his talent, something that might be forgotten as he, like Robert DeNiro and Al Pacino, turns into a parody of himself in his twilight years. Nicholson's face and voice are enough to captivate you alone, something proved by this cold open. Second, the film's key relationship - between Nicholson and his brother, played just as impressively by the underrated Bruce Dern - hinges upon the true-life dynamic between the two and the ever-present push and pull between reality and fantasy, truth and lies.

One interesting choice Rafelson and his screenwriter made was to make Nicholson's character the younger brother. Typically, you would expect to see him as the older brother, constantly needing to save Dern from his fantasies. By making him the younger brother, the film sets Nicholson up as willingly playing along with his brother's games, desperate for his stories to be true in order to confirm the reverence he has for his older brother. It's a beautifully sad dynamic, and it makes the film much richer.

There are some real flaws here, though, and a lot of how one feels about the movie will depend on how forced the quirkiness seems. Moments like the fake beauty pageant and the horses on the beach could seem overly precious, like a prototype for another movie set in New Jersey, the far more conventional and forced Garden State. And there is a legitimate case to be made that the climactic moment is not earned - even if it is it remains surprising. The movie is messier than its predecessor, the much-better-known Five Easy Pieces, but I liked it more because it manages to take that film's tone and give it a further surreal edge.

Rafelson's career stalled after this film, and though he continued to direct, it was at a much slower clip with very little success. His rhythms were certainly of a particular moment, but it's a shame he didn't get more work as he matured. Five Easy Pieces and The King of Marvin Gardens represent some of the strongest personal dramas of the early New Hollywood period, and their inclusion in the BBS boxset makes them welcome additions to the Collection.
Posted by bza at 8:34 AM