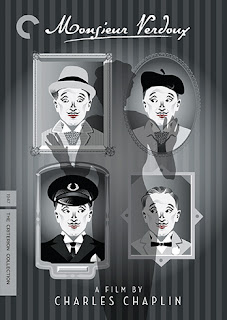 This late-era Chaplin is a bit of an odd beast. The star/director plays a typical anti-hero, the refined and principled murderer, making it a much darker film than he is best known for (of course, The Great Dictator is fairly bleak). It's also simply not as funny, entertaining, or biting as the similar serial killer movie from across the pond made a few years later, Kind Hearts and Coronets. But the movie manages to hold together, mainly thanks to Chaplin's performance, which the film was destined to live or die on anyway seeing as he takes up the vast majority of the film.

I've never been a huge Chaplin fan, but the recent spate of his films in Collection is still welcomed. Monsieur Verdoux is the least well-known of the four films - with good reason, since it's also easily the most forgettable and least impressive. That being said, late-era Chaplin is often forgotten, and the director's importance in history means giving these films a higher profile is worthwhile.

In truth, I'm probably underselling the movie - it really is a lot of fun. But if you are expecting another Chaplin classic, you might be disappointed. And if dark humor is your thing, I'd urge you to pick up Kind Hearts and Coronets.
Posted by bza at 12:28 PM