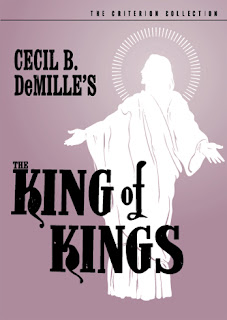 I mean, look. You aren't coming here to hear about Jesus, and this movie was all a little much for me. If you ask me to pull out a Jesus movie to watch, like any good athiest I'm going to pick The Last Temptation of Christ 99 out of 100 times. The other time I'll watch the South Park where Jesus and Santa team up in an action spectacular. The King of Kings had no better chance of being my kind of movie than The Magic Flute did - it's not the quality of the film but the very reason for its existence that eliminates my interest.

That said, The King of Kings is really quite the spectacle. I think there might be more people in this movie than there are in Heaven's Gate, which I actually thought was impossible. Watching a movie like this reminds you what a joke big crowd scenes are in movies today, where they take one dude and replicate him 500,000 times so people think they got a bunch of people to be in the movie. Yeah, I get it, it's not supposed to be about the scope of the production, it's about the scope of the story. But still, when you are paying upwards of 10 cents for your ticket, you want to know they shelled out the stops and pulled out all the big bucks.

There's definitely some cool stuff here, and I hate to imply that the movie is worthless, because it's not. I do wonder, however, how different this movie really is from something like, say, Armageddon, other than that it came first. Other than the Jesus stuff (which really isn't that different from the America stuff) it's mostly just big spectacle and special effects, right? The Jesus stuff isn't that big of a deal, is it?
Posted by bza at 1:09 PM