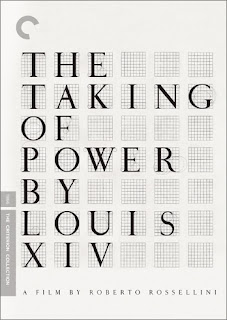 The Taking of Power by Louis XIV was originally made for television, which would make a lot of sense today, but seems less logical in 1966. Indeed, this is the kind of nuanced, detailed drama that has begun to thrive on television in America post-Sopranos - it might be better than The Tudors or The Borgias, but it's not far off in intention or execution.

This might be seen as condemnation of the film, and it certainly prevents it from rising to the level of Rossellini's earlier masterpieces. But TV is so good these days (or at least good TV is) that it's hardly the mediocre dying grounds it used to be, and that this film would fit in with the best is a testament to its intelligence and entertainment value. It's also a pretty interesting history lesson and philosophical exploration of power and its virtues and vices. This is slight work, to be sure, but it happens to be really really well made slight work that has a deeper message that shouldn't be overlooked.
Posted by bza at 12:09 PM