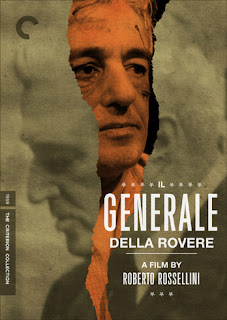 Il Generale Della Rovere belongs to the mini-genre of films about flawed, nihilistic characters who come to see the light and stick their necks out for the greater good. A disproportionate number of these movies are set during World War II, the war still often held up as the shining and untouchable example of a necessary and just fight. As far as those films go, this is one of the better ones, mainly because of two people: Roberto Rossellini and Vittorio De Sica.

Just that these two towering figures would collaborate makes the film relevant, but they are both close to the top of their game. De Sica's performance is pitch perfect, making his character's arc extremely believable and earned, while Rossellini balances between docudrama-style preciseness and poetic beauty. The end of Il Generale Della Rovere comes abruptly, but it is well-earned and moving. This is a beautiful movie about the soul of Italy at one of its darkest moments, just 15 years after the fact.
Posted by bza at 5:54 AM