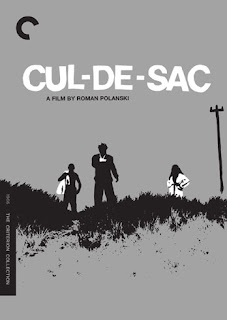 I've been thinking a lot about Cul-de-sac ever since I saw it, which was a few weeks ago (I'm a bit behind on posts). It's certainly a remarkable piece of filmmaking from a young director who would go on to make a handful of great movies and one masterpiece (Chinatown). The problem is I don't really like what the movie is saying. I hesitate to make the comparison, both because it is obvious and too damning-by-association by a longshot, but the film's closest relative is Straw Dogs both in story and general approach to the human condition. It's not as purely despicable as that film, but in some ways it's more misguided.

The most obvious difference between the two films is that the couple here has their intruders forced upon them, but the two crucial dynamics are the same. The two men here represent masculinity and intellectualism, while the woman is the jealous, manipulative bitch all directors apparently believe them to be. Thankfully, Polanski avoids the sexual violence of Straw Dogs - she ain't this criminal's type, after all - but he still manages to inject plenty of pseudo-psycho homophobia and sexism into the proceedings. The film lacks the complex and elemental appeal of Polanski's vaguely similar Knife on the Water in this regard, and this is what makes it lean more towards the brusque garishness of Straw Dogs. As a harmless bit of filmmaking, Cul-de-sac is rather energetic and lyrical, but if it's to have any greatness in it, this human-nature statement is demanded - and that's where the film falls short.
Posted by bza at 11:15 AM