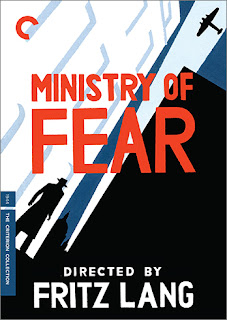 Hot damn, what a fun piece of top-notch pop art this movie is! I had actually never heard of this film before Criterion announced it, and had always assumed The Big Heat was Lang's best film after coming to America. But this is some Nazi-fighting, spy-loving goodness. Lang does his best Hitchcock impersonation as an average guy gets mistaken for a Nazi spy, throwing his life into disarray. There are some really beautiful touches here - not just the obvious ones like the cake and the trademark Lang lighting, but great stuff like dialing the phone with the scissors (a prop that's used in three amazing ways within a matter of minutes) and the artfully designed seance scene.

Though I wouldn't go so far as to say this approaches the near perfection of The Lady Vanishes, I actually liked it quite a bit more than Night Train to Munich, a much better-known film. As I pointed out in my comments on the latter film, the entire idea of an adventure movie being made during World War II about the war is simply not something that would happen now. (There was obviously a little bit of it in the Cold War, but these battles were entirely fabricated, often coming not from the Soviet leadership but from rogue villains, making the appeal less immediate.) This is partially because we have moved beyond conventional propaganda being an effective tool, but it's also a product of the grey wars that have been fought over the last sixty years, making a cut and dry villain much less believable. But there's something simplistically pleasurable about the concept, even if we know it's reductionist, and as Tarantino showed with Inglorious Basterds, there's nothing that can get a crowd going like mowing down some Nazis.

I've strayed from the film a bit here, which relies much more on human-level intrigue and suspense than political machinations or war-time stakes. Lang's success with Ministry of Fear is to wrap you up in his protagonist's journey (an achievement made even more impressive by the fact that his lead is Ray Milland, one of the more mediocre stars of the 40s) and keep you constantly excited about where it will go next. Do not let this one pass you by when it's released.
Posted by bza at 12:55 PM