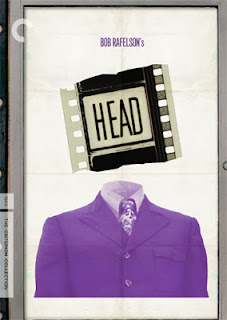 Head is either the least funny, most disastrous comedy ever made or the weirdest, biggest "fuck you" to the mainstream ever released. I like to think it's the latter, but ultimately it doesn't make a difference because the film is such non-stop fun. It belongs next to House and Zazie dans le metro in the "what the fuck did I just watch?" Criterion hall of fame, even if it doesn't reach the clear-eyed genius of those two films.

Certainly what's most shocking about Head isn't that it was made  by a Hollywood studio, but that it was made about the Monkees. Imagine this movie being made today by the cast of Glee and you get a pretty good idea how crazy this is. In the 60s, this was simply much easier to do because the gulf between the powerful men with the checkbooks had to rely on producers and directors to tell them what was going to work with the youth market they desperately wanted to reach but had no idea how to understand. Today, the people running development and marketing are far more likely to have a foot in both worlds - The Conquest of Cool model in action.

Head isn't as accomplished or perfect as its direct inspiration A Hard Day's Night, but it's still a hugely entertaining movie that is chockfull of ideas and jokes. I'd probably put it up against any other movie in the collection for pure crowd-pleasing cinematic fun, and my suspicion is that its rewatch value ain't too shabby either.
Posted by bza at 10:43 AM