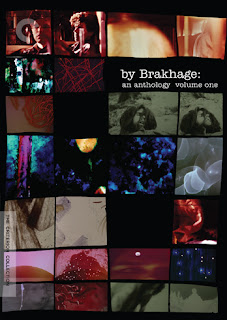 By Brakhage is, depending on your definition of "experimental," the highest profile experimental release in the Collection. Putting aside the dissection of definition, the set's broad range of styles and subjects makes it one of the most interesting and different spine numbers in the Collection. This wouldn't mean much if the films themselves weren't fascinating, but they are truly unique and invigorating. This is not a collection for everyone, to be sure, but for those who are open to it, there are few better discoveries in all of Criteriondom.

To be sure, there is a lot here I couldn't wrap my head around. The long piece is Dog Star Man, which I found somewhat boring and oblique. And some of the earlier films like Desistfilm and Cat's Cradle seemed more like interesting, um, experiments, than fully formed artistic statements. But Brakhage's later, intensely abstract work is beautiful, hypnotic, and hugely influential - The Dante Quartet and Black Ice in particular are stunners.

The film here that really blew me away though was Window Water Baby Moving, about the birth of his first child. Interestingly, the film was heavily criticized by feminists and other avant filmmakers at the time for coopting a uniquely feminine process. Without knowing this background going in, I had a completely different experience, and can say without a doubt that this film is the closest I've ever seen to my experience of being present when my son was born. After having read a little bit about the background of the film, I have some objections with how it was made, but the finished product is so moving and realistic that I think every dad should see it.

by Brakhage is an invaluable entry in the Criterion Collection because it shines a light on a thriving and hugely influential galaxy in the film universe that is often overlooked. Unlike animation, the only major arm of the medium that is totally absent from the Collection, avant garde film does not have a higher profile elsewhere in home video, where the work can be preserved and receive a high profile. That makes a release like this so important - there are probably thousands and thousands of people who have watched a Brakhage film for the first time simply because of Criterion, including myself. I'm grateful to have been exposed to this kind of a visionary, even if - or more likely especially if - his work is so far removed from the film I typically value.
Posted by bza at 11:09 AM