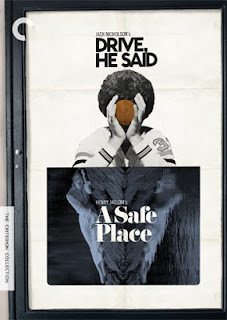 A Safe Place is one of the worst movies in the Criterion Collection - not in the sense of a movie like Armageddon which was probably doomed to awfulness from the start, but just an experiment by a bunch of talented people that didn't work in pretty much every way. At every stage of the production and post-production, there were probably moments where the movie seemed like it was going pretty well, and taken on their own most scenes here could be the weakest scene in a much better but still mostly improvised, abstractly constructed film. But when they are all combined, it's a practically insufferable mess. Of course, I'd rather have ten of these than one Armageddon, just because one of those ten is probably going to be both great and potentially revolutionary - which is pretty much what happened with BBS, only they had a much more impressive track record. (Of course, the counter-argument is that one Armageddon would ideally pay for ten of those movies - a better argument ten years ago when Hollywood still wanted to make interesting movies alongside their shitty blockbusters, and an even better one when considering why BBS wasn't able to continue the ride.)

Having watched all the films in the BBS set now (the set as a whole didn't get a spine number for some reason, so I won't be posting on it), this really is a great set. With the exception of the two movies included on this disc, every other film is worth multiple viewings. The Last Picture Show is a genuine masterpiece, while Head, Five Easy Pieces, and The King of Marvin Gardens represent one of the most underrated beginnings to a directing career I can think of in Hollywood. (Sadly, both Rafelson and Bogdanovich failed to live up to their promise in their later careers.) Though the set doesn't touch on all of the things that made New Hollywood great (and obviously some of the major movies in the movement aren't here), the framing of BBS allows Criterion to grab at least a handful of the most significant ones, and wrap them up in a nice neat bow.

By the way, as annoying as I found her in this movie, someone really ought to put Tuesday Weld in a movie. She's only 69 and I'm pretty sure she hasn't forgotten how to act, which she does pretty well. In fact, she was damn near great in the now little-seen Didion adaptation Play It as It Lays. I realize she was never that huge of a star like Jack or anything, but it's just another prime example of how easily women are forgotten in Hollywood that she hasn't made a movie in nearly ten years and a relevant movie in nearly twenty.

I don't have much else to say beyond: really, Orson Welles?