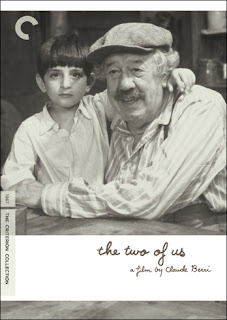 The Two of Us not only would not be made in Hollywood today, it would be laughed out of development offices everywhere. "Where's the third act?" they would say, adding that "it's like having a gun in the first act and not using it in the third," or some other misguidedly rendered cliche about what makes a proper movie. Indeed, the film does lack its crucial turn, the sole reason for its existence within a conventional narrative framework. The fundamental question is this: how can a boy who is Jewish go to live with a man who hates Jews under the pretense that he is not Jewish and have that lie stand beyond the final credits? Without this reveal, the movie loses its confrontational moment, the one that would elucidate its themes and lead to the inevitable conclusion of its characters arcs. Yet by ignoring this imperative, the movie becomes all the more revolutionary, a movie about average people who are never called on to rise above their place or sink to new depths. Its finally a movie about racism and its unavoidable complexity and compartmentalization.

The center of the film is Michel Simon, an actor that was by the time he took the role one of the great actors in French cinema, with a career that stretched back to the legendary L'Atalante. His character is an early prototype Archie Bunker, a man with a firmly entrenched world view that is quickly and loudly dying out around him. He's a conservative without power outside his "castle," just as Archie is. And like Archie, once you get past his antiquated, potentially dangerous worldview, he's a gentle and warm person, a decent person. It's the gap that is most profound here, mainly because the strain of racism Simon's character represents, anti-semitism in particular, was one of the most destructive in history. Despite his distance from the actual tragedy, his acceptance of the culture makes him a difficult character for French audiences in 1967, still struggling with the history of the Vichy government. Berri was apparently so concerned with this that he put a disclaimer at the beginning of the film essentially saying "oh, the silly innocence of a child." It's an unnecessary addition today, but indicates how unique the film was at the time. Today, it's unique for a different reason, that absence of shattered perceptions mentioned above. The addition of this realization - and what Simon's Grandpa would have done with it - might have made the film more conventionally satisfying, maybe even more emotionally powerful. But without, the film is much more realistic, which ultimately makes it more valuable and moving.
Posted by bza at 7:15 AM