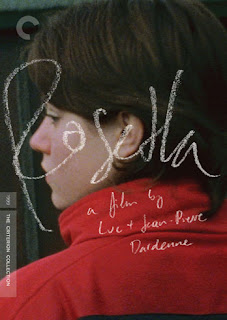 Rosetta is a devastatingly simple film. We begin and end on the titular character, and rarely stray from her. She is in fact in every scene - even a couple where it seems like she's dragged into them so the movie can keep the streak alive - and nearly all of the action happens because of things she does. This would be difficult enough to construct a film around, but Rosetta also happens to be a character who is not especially likable, even if you do sympathize with her and root for her. This is the most obvious difference between this film and the previous movie by the Dardennes brothers, La Promesse, but really Rosetta is just an intense crystallization of the ethos behind that movie. It's hard to think of a more empathetic movie that still manages to feel so brutally realistic. For fans of socially conscious film, Rosetta might be the perfect example of the style - for this reason, I'm not surprised some people consider it one of the greatest movies of the past few decades.

I think what struck me most about the film, though, was its pure simplicity. The story lacks any major catharsis, the film ends abruptly, and Rosetta is never really afforded anything but the basic thing she most desires (or is it?): a low paying, unstable job. The film is almost distracting in its dogged determination to avoid straying from its purpose as a document of this lonely, desperate girl's life. The movie it most reminded me of, actually, was not La Promesse, but Bresson's Mouchette. However surprising it is to say about a Bresson film, though, Rosetta is actually the simpler of the two movies, and feels less episodic. Certainly his work was more lyrical than the Dardennes', but both took a humanist approach to their film, and ultimately Rosetta is the more satisfying of the two because its protagonist is more active and authentic - less a sacrificial lamb in the Cabiria tradition.

It's the simplicity of the film, however, that made me hesitant to fall head over heels for it. When combined with a protagonist that is very difficult to like it becomes much harder to find a way in. I think multiple viewings would improve my opinion of the movie, and unlike some other films I have felt that way about, Rosetta was impressive enough the first time that I am certainly willing to put in the time, even if the emotional toll the film takes can be exhausting.
Posted by bza at 9:36 AM