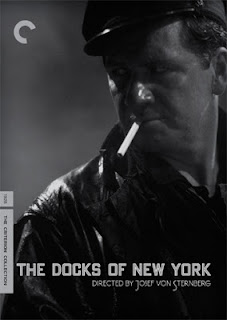 Although it was my least favorite film in the von Sternberg slient boxset, The Docks of New York is a really enjoyable film and a fine addition to the set. It's also a fun look at the depiction of drinking during prohibition and a great case for George Bancroft as a movie star. The film begins on a boat but quickly sets up the central setting for the story in a pre-prohibition bar for sailors and other rowdy proletariat. Bancroft rescues a woman from an attempted suicide by drowning and they slowly become entangled in each other's lives. The plot couldn't be more basic, but as with von Sternberg's other Bancroft-starring film in this boxset, Underworld, it's all about execution.

In this regard, von Sternberg never seems to disappoint. This is a perfectly executed movie, and even though I enjoyed the other two films more, this was the one that made me realize just how underrated von Sternberg was as a director. I suppose most of that comes from the fact that his talkies are overshadowed by his muse, Marlene Dietrich, and he had a tragically short career filled with burned bridges and an unsustainably negative reputation. But I can't think of many more effortlessly talented film directors from the silent era - here was an artist who simply understood film language from the start, a natural talent. It makes The Docks of New York so much more exciting and fresh than it ought to be.
Posted by bza at 8:57 AM