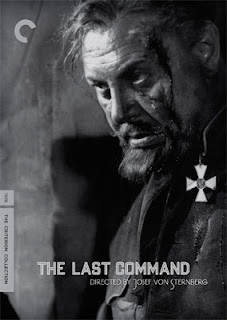 The Last Command is not just better than the already-stunning Underworld, but is certainly one of the best silent films I've ever seen, a swirling epic that stretches from the cruel factory-line chaos of the film studio to the historical sweep of the Russian revolution. I don't typically use the word since it's so overused (I just use other overused words instead) but I was totally mesmerized from the moment the flashback started.

Depending on whether or not you believe Sternberg, The Last Command came from a story told to him by the great Ernst Lubitsch, who wasn't convinced it would make a good film - though obviously the sensibility he would have brought to this story would have been completely different. Either way, the film is based on a true story about a Russian general who ended up as an extra in Hollywood. Like any good movie about movies, the fun house mirrors are everywhere, most notable with regards to Jannings, his own career in Hollywood as German immigrant, and the various relationships between his character and both the film within the film and the film itself. But beyond these early explorations of what would later loosely be defined as postmodernism (something which had long been explored on stage), the film is also an intense story about one man's emotional journey and what it says about nationalism, human nature, and the mind. Jannings's character has such a strong sense of reality and self in the Russia flashbacks that his downfall is shocking even as we know it was coming (and deserved, regardless of your opinion of the philosophy behind the revolution). This same confidence makes the climax that much more believable and stunning.

There have only been a handful of directors whose movies I have watched over the course of covering the entire Collection that I have been so impressed with that I am compelled to seek out all of their other films that are available outside of Criterion. Melville, Ophuls, and Truffaut come to mind immediately. Von Sternberg is now on that list.
Posted by bza at 7:33 AM