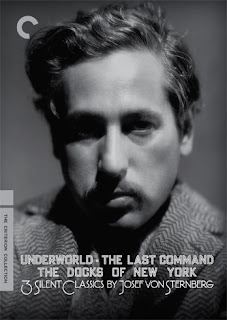 This was one of my biggest Criterion surprises in recent memory. I guess I should have been more interested in the set based on how much I loved The Scarlet Empress, but the serious looking fellow on the cover made me think the set was going to be rather dreary. I was totally wrong - this is one of my favorite boxsets in the Collection.

Of the three films, I have to say I loved The Last Command the most. While it's story and emotional arc are a bit dated, the effectiveness of the storytelling and Jannings's performance made it feel relevant and still impressive in a contemporary context. Meanwhile, Underworld transcended its historical importance as an early gangster picture and, like The Docks of New York, which is far superior to similar working class melodramas of its era, became a stellar example of the craft of cinema - not to mention a fun and surprise-filled ride!

One note about the packaging here, though: while the set they put together is really beautiful. I think the cover designs - all portraits - do a disservice to the motion and vitality of von Sternberg's vision. As someone who has seen the films, I think incorporating more of this energy would more accurately reflect the experience of viewing, in much the same way the Qatsi set was able to present those films. It's a very well-designed set, for sure, I just happen to think it's not 100% representative of the work it contains.

Still, overall I really can't recommend this boxset enough, and it's a shame that more people haven't been exposed to it (it's in just 450 or so collections on the site - for whatever that's worth). Obviously most silent film is an acquired taste - in many ways it's a completely separate artform from talkies - but I would be surprised if anyone who has liked at least one silent film in the past wouldn't be blown away by these. Please seek these out if you are at all intrigued.

Underworld
The Last Command
The Docks of New York
Posted by bza at 9:30 AM