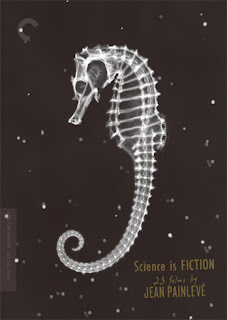 Science Is Fiction might not contain a masterpiece of world cinema and it might not be from one of film's greats, but it also might be a perfect representation of everything great about Criterion. The set consists of (shocker) 23 films made by the French scientist and filmmaker Jean Painlevé, plus a series of his shorts scored by indie band Yo La Tengo and a huge compilation of interviews with the director that takes up a full disc. The films themselves range from less than ten minutes to a half hour, and cover a wide ranges of topics and formats, including silent scientific films, jazz-laden pop nature films, and even one stop-motion short the director made. Overall, it's the kind of box that any director with a similar career would undoubtedly be satisfied with - a perfect distillation of the director's work, put into a format that is easily accessible and has the potential to appeal to a wide variety of film nerds.

My two favorite sections of this set after one complete viewing are the popular films and the films for Le Palais de la Découverte. The former collection consists of films that are funny, disturbing, oddly beautiful, and often all three at the same time. Painlevé's influence on later nature films is evident throughout, but it's especially endearing when you see his sense of humor and childlike enthusiasm for introducing these discoveries to a broader audience. When compared to the films he made for a scientific audience, it is even clearer how deliberate and smart these choices are. The silent popular films he made, the menu explains, were shown in avant-garde cinemas in the 1920s in Paris. As Woody Allen so wisely exploited in Midnight in Paris, this era must have been an indescribably exciting time, as modern science and art took over, war had supposedly ended, there was yet no depression, and the world seemed limitless. Seeing these films when they were produced must have been an experience unlike any other.

The latter set of films is not made up of nature documentaries, but are instead semi-lectures on some of the most fascinating and thought-provoking areas of contemporary science, including the fourth dimension, the universe, and the comparison between speed and distance. Even though I have learned about all three of these subjects extensively in the past, these were still fascinating and immediately accessible presentations of each. The short on the universe in particular reminded me just how much we take for granted everyday, how seemingly content we are to remain ignorant of how our world is constructed - or even how we exist in the first place. Of course, this is not willful ignorance - we all wish we could understand what we have yet to understand. But it's a reminder that none of us are really doing anything except those who have dedicated their lives to discovering the answers to the questions of existence. Everything else is small by comparison.
Posted by bza at 12:23 PM