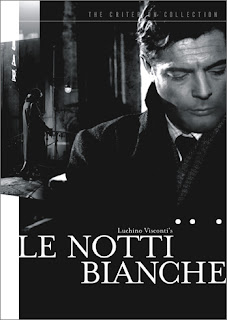 Although it is dependent upon grounded, intense emotion, Le Notti Bianche is most impressive in its moments that seem least grounded in reality. In the scene in which Maria Schell tells a story in the same location where it occurred, Visconti pulls back from Schell in the past, only to reveal it is the present and Mastroianni is there. The sequence in which the couple dances in a rock club seems far too perfectly choreographed for it to be an accurate depiction of a small city in Italy in the 1950s. Meanwhile, the couple wanders through obvious sets that make the whole film dreamlike and grandiose in ways the real, beautiful Italian streets couldn't manage. I was frequently reminded of Japanese films like Kwaidan and The Ballad of Narayama in the use of purposely artificial sets for the purpose of creating a mythological tone that is otherworldly yet strangely familiar.

Le Notti Bianche is based on a Dostoevsky story, and Visconti presents it as part-melodrama, part-humanist. Mastroianni is excellent as always and Schell, who I've only seen in a few other films without really noticing her, is the emotional backbone. But the film is really elevated from memorable to great by Visconti's direction, in much the same way All That Heaven Allows or Brief Encounter is. Like Sirk and Lean, Visconti takes his "women's" films absolutely seriously, well-aware that the themes and simple plots allow for enormous space for artistic license. This film might not be quite as good as those all-timers I mention, but it puts Visconti in the same neighborhood as a director of melodramas.

Le Notti Bianche is certainly one of the most forgotten Criterions. Released in the pre-"C" days but well after the initial rush of classics that began the DVD portion of the Criterion journey, it's since been overshadowed by Senso, which is not as good, and Visconti's masterpiece, The Leopard. His two best-known films, Rocco and His Brothers and his debut, Ossessione, based on "The Postman Always Rings Twice," are notably missing from the Collection, but I think Le Notti Bianche is as good if not better than those classics. It certainly deserves a reevaluation from the Criterion masses.
Posted by bza at 11:31 AM