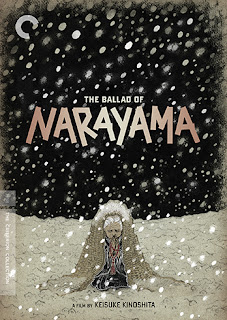 Note to Congress, I've got the perfect idea for keeping Social Security and Medicare spending down. You see, in The Ballad of Narayama, when people turn 70 they go up a mountain and die. And when I say "up a mountain," I literally mean they walk up a mountain. This would solve all of our problems! (I should probably point out here, I will not be going up a mountain. Just other non-me old people.)

I don't think this is the point of this story, but it makes for an interesting enough concept behind a 90-minute kabuki-style movie. Kinoshita's sets are unquestionably the star of the film; he uses bright colors, huge painted backdrops, obvious sets that get rolled out and sequestered, and so many diferent fields of view that it can difficult to tell what is 2D and what is 3D in the background. This obvious artifice takes nothing away from the human story being presented, and even though none of these characters are especially memorable, the old woman is kind enough that her journey means something by the end of the film.

The Ballad of Narayama is a pretty film and an interesting one from this aesthetic perspective. But it's not at all comparable to Kinoshita's other Criterion entry, Twenty-Four Eyes, and I'd probably have more interest in Shohei Imamura's version of this story, made nearly three decades later.The melodrama shines through often, and I don't know how thought-provoking the film is. I still enjoyed it, I just don't think its reputation will keep it in the minds of Criterion watchers for very long after its release.
Posted by bza at 10:52 AM