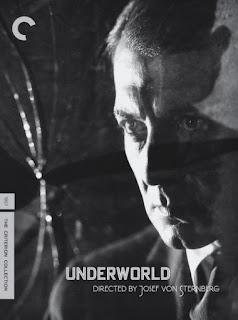 This was a huge surprise for me. Although I've definitely enjoyed the von Sternberg talkies I've seen, I chalked most of that up to his muse, Marlene Dietrich, despite the fact that so much of what I loved about The Scarlet Empress in particular was the direction and cinematography. I had assumed that von Sternberg's early work would be less impressive and more subdued. I couldn't have been more wrong.

Underworld is largely considered the first modern gangster picture, the kind of movie with swell dames who turn sentimental and fast crooks that thumb their nose at mom and the law. It's where "the world is yours" originated - here it's "the city is yours" on a billboard. It's also fairly fast-paced for a silent film, or really any film before the 80s. It begins with an explosion and doesn't really let up for its 90 minutes.

The story of the film is certainly simplistic by today's standards. The characters are pretty one-note - really, only one of them changes at all, and it's a pretty quick and clumsy switch. But the movie is made on its cinematic language, which is lightyears ahead of what most of Hollywood was doing at the time. Von Sternberg uses some great dollys, POV shots, and quick cuts that make the visuals pop like you rarely see in the studio system from the era (no wonder the film was underreleased and von Sternberg continued to have an antagonistic relationship with his bosses). There are great small touches, too, like the use of the feathers and flowers.

This is really fun cinema, and I'd be surprised if even the least likely silent-film enthusiast wasn't taken in by this film. It's an unexpectedly great start for a boxset I'd been putting off a little.
Posted by bza at 4:49 PM