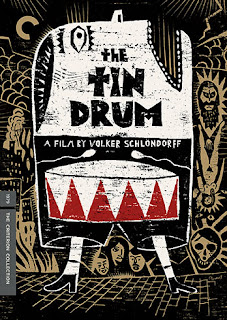 I had the opportunity to see The Tin Drum on the big screen this month as part of the screenings of the new director's cut that Criterion just put out. Although I am very happy I went, I didn't love the film as much as I hoped it would. Though I haven't read the book, my suspicions are that The Tin Drum is a good example of the difficulties that come with adapting books for the big screen. The  story is obviously meant as satire and allegory, but what reads as lyrical on the page must be rendered literal on screen. The film then has been drained of much of the humor that would make it more appealing and believable, and the end result is a very strange film indeed.

I haven't been especially taken with the other Schlondorff films in the Collection. Young Torless was disturbing and worthwhile - and I liked it much more than Coup de Grace - but I wasn't especially moved by it and it didn't stay with me especially long. The Lost Honor of Katharina Blum is a masterpiece, but it was co-directed by another significant voice in German cinema, Margarethe von Trotta. The Tin Drum, then, is Schlondorff's true stand-out, the film for which he will be remembered. And it's certainly big in scope, stretching over a number of years and even generations, told from the perspective of a boy who chooses not to age and lives through World War II as an eternal toddler. The film is strongly sexual, especially with the scenes that have been added into this edition which involve Rasputin and an orgy. But this sexuality's ties to its historical and political commentary seems muted without the novel's prose to ostensibly guide the way.

The film has fleeting moments of real impressive cinema - and despite its long running time, I was never bored - but I just ultimately don't think it comes together as a clear and compelling fable. I had a lot of high hopes for this one, but it was a bit of a letdown.
Posted by bza at 6:06 PM